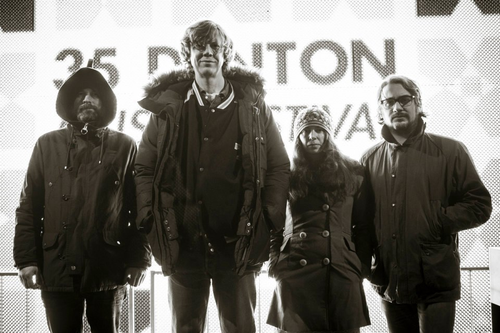 Sonic Youth broke up in 2011, along with the marriage of the band’s leaders, Thurston Moore and Kim Gordon. Within a year, Moore had formed a new band, Chelsea Light Moving, and released an eponymous record. His bandmates are old friends, namely John Moloney (Sunburned Hand of the Man), Keith Wood (Hush Arbors) and Samara Lubelski (solo, Jackie-O Motherfucker etc.), each of whom have had records released by Moore’s label Ecstatic Peace.

Last week I spoke to him about the band, his poetry gigs and his personal life.

Lorraine Carpenter: So tell me about Chelsea Light Moving.

Thurston Moore: It’s all very familial. I’m writing songs and playing them and having these musicians play with me, particularly in a live context. The new stuff that’s been going down is primarily electric guitar-focused. Before that I was doing more investigation on acoustic guitar, mostly with the solo record that Beck produced, Demolished Thoughts, which was mostly straight-up acoustic compositions. This band came out of touring that live and burning out on the acoustic guitar presentation and wanting to pick up an electric guitar again and start doing more immediate, amped, no-wave rock.

I didn’t wanna give the record my name. I wanted some distance from the “solo guy from Sonic Youth” thing. I like having band names anyway — they’re a little less self-exploitative, and it feels like a gang.

LC: Are there any new bands that you’re excited about these days?

TM: I live in England right now and I’ve always been somewhat of an anglophile. There’s a band from there called Savages, they’re really worth seeing. I like them a lot. I prefer them live to the recording — not to disparage the recording, but live they’re phenomenal.

There’s another all-girl band from the U.K. called Trash Kid, they have this really good sort of multi-ethnic mix in their rock ’n’ roll and they’re somewhat political and they’re very young, sort of proto-riot grrrl.

I like Pussy Riot. I like a band that can be more than just a band on stage playing music in any kind of standardized, typical way. Here’s a band that goes to play old Russian orthodox churches and get arrested, or goes on the roof of corporate buildings or stands outside the Kremlin. That’s a real band. I actually like the music, too. It’s so furious and wild. I’d like to cover one of those songs just to figure it out.

I’m a maniacal record collector though. I usually put old records on, old jazz records like Paul Bley or something like that.

LC: What else are you working on at the moment? It always seems like you’ve got a stack of projects on the go.

TM: I don’t have too much of an organizational concept of what I’m doing. I can barely keep up with the calendar. Sometimes I overbook myself — I’m a little mismanaged in that way. I think of it as being active and being grateful for the opportunity. I realize so many people would love to have those opportunities. I don’t really have any interest in focusing on one thing. I like being in a band, I like performing. I’ve been teaching at Naropa University, a poetry studies school that Allen Ginsberg founded in the ’70s; I teach there every summer. I’m very involved in that community of contemporary poetics in the USA and Canada and now in London. I’ve done some reading tours, and actually have one coming up: I’m doing a tour in France with Eileen Myles, who’s this wonderful lesbian poet who comes out of the St. Mark’s Poetry Project in NYC.

I tend to be really into things that don’t make much money, which is really too bad. The things I’m really interested in are the most marginalized things. It’s not exactly, “coin to me babe.” It’s hard enough doing the music I do and paying the rent, but when you start being a writer and getting totally devoted to poetry, there’s not much of a windfall there. The fantasy of moving to Paris and living in some attic apartment and writing poetry and retiring like that is just what it is, a fantasy. Unless you get a sponsor, like if Johnny Depp would give me some property to live on.

LC: So are you single?

TM: (laughs) More or less. No, I have a very good and connected relationship with somebody now — the last few years have been a transitional period for me in that department. I’ll leave it at that. ■