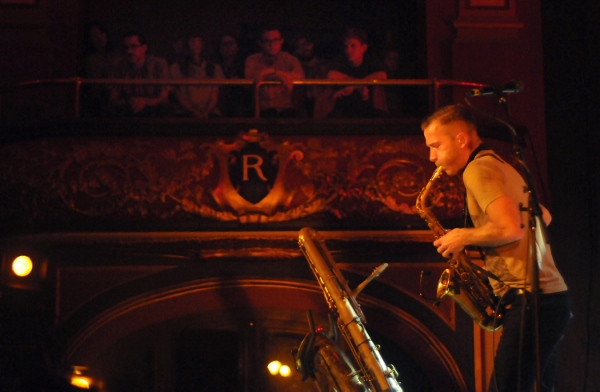 Colin Stetson at the Rialto. Photo by Cindy Lopez

Pop Montreal 2013 has come and gone, and with it we bid farewell to the percentages of brain cells, sanity and overall health that we sacrifice each year to do this thing right.

We’ve all ignored our hangovers to share with you this collection of magic moments, beginning with an essential in-depth analysis of this year’s Pop swag:

Like any self-respecting music conference, Pop Montreal awards its artists, delegates and press invitees a handy-dandy, tchotchke-laden tote bag. This year, guests were first welcome to their choice of several different bag designs; classic tote, ’80s gym bag, different colours, sizes — a nice touch. Then, we got to pick and choose from the marvelous promotional wares. I was delighted by my sweatband care of Yelp, which also provided a helpful stick of lip balm, which I’d actually needed all afternoon. Nicely done, Yelp. St. Ambroise stepped in to make bad drunken decisions a little safer and classier, providing a bright red jimmy cap, inconspicuously tucked in a match-book type casing. You can never have too many CJLO buttons or keychain-rigged mini Sharpies, so I scooped up one of each, when an array of bright nail polish bottles caught my eye. Choosing the best colour for my girlfriend, I was asked to sign up for American Apparel’s newsletter, which I totally fudged. Then came the crowning jewel of my 2013 tote experience: AA also gifted shirts emblazoned with topless chicks in various poses. My XL features two BFFs sharing a bubble bath. Fun!
Satisfied with my haul, I dipped to the bar, where I traded in my complimentary beer ticket to the sound of Socalled, who was wearing a donut-themed tank and bellowing out ’80s classics with gusto. Pop, you’ve truly arrived. (Darcy MacDonald)

Murray Freakin’ Lightburn, you courageous soul. Armed with only a Peter Gabriel-esque headset mic, a percussionist, a body bag and two angels (one of them a certain Cult MTL film critic), the Dears frontman performed the hell out of his debut solo album, MASS:LIGHT. He called the Ukrainian Federation set an off- off- off-Broadway play, which about sums it up. It was morbid retro-future sci-fi meets emotive basement preacher (complete with cheesy sky projections behind him) frantically gesturing in the fight to save our souls. He was a total hambone, and the music was canned, but it was such a compelling spectacle, and he was so into it, that I couldn’t help but get lost in its abstract weirdness. A true conversion experience. Move over, Kanye. Montreal’s got Murreezus. (Erik Leijon)

Tim Hecker damaged the foundation of the Rialto last night. It’s a wonder the building still stands. Lingering in the darkness, hidden in shadow, plugged into circuit boards that talk to God, Hecker used technology to paint pictures of the beginning and end of time. Stars were born in trickles of sound only to implode, drawing the crowd over the event horizon into the grumbling, subsonic mouth of his dark singularities. Delicate, perfect signal consumed by unintelligible big-bang noise.
Then there was a much-needed post-soulfuck smoke break.
Colin Stetson hit the stage a few minutes later, lights on, much less mysterious but no less magnificent, circular-breathing his arpeggiating whale sound into the ocean of unassuming Pop-bodies. Offstage ghost vocals anchored the compositions, floating sinuous melody over the sweaty, perpetual oscillation of Stetson’s sax. (Brenden Fletcher)

The Rialto was the site of a second magic moment at this year’s Pop, when local indie country dude Li’l Andy played with a full, electric band, their performance projected live (and yes, in 3D) on a screen behind them. The crowd wore old-school red- and blue-lensed glasses, and the effect was indeed trippy, especially in such a majestic setting. Guests including Whitehorse, Katie Moore and Patrick Watson stopped in to sing lead, lending the event the feel of a classic country revue. The other star of the night, lending all its ethereal melancholy and mystery to the arrangements of guitars, piano, drums and fiddle, was the pedal steel guitar. Love that shit. (Lorraine Carpenter)

I rolled through Metropolis to catch the Narcicyst, his new band Illuminarcy, and a brand-new show including completely ill visuals and a couple of new jawns to boot. Wait’ll you catch this one. Narcy was taking part in an Adonis-sponsored, Arab-themed Pop showcase headlined by Lebanon indie rockers Mashrou Leila, who honest to God stole my heart for minute. (DM)

A quick dip around the corner to Club Soda found me right on time for Houston-to-NYC Pop second-timers Fat Tony and Tom Cruz, hands down my personal favourite hip hop discovery at this year’s fest. I’ve been bumping Fat Tony’s latest, the Cruz-produced Smart Ass Black Boy, all day. (DM)

The guy who’s produced a dozen Bowie records, from 1969’s Space Oddity to this year’s The Next Day (including the Berlin trilogy, for fuck’s sake), not to mention T-Rex’s best records, participated in a Q&A at SAT on Saturday. A career retrospective and the occasional uncensored anecdote (Marc Bolan’s egomania and Bowie and John Lennon’s “casual coke party,” for example) would’ve been enough for the fangirl in me, but his assessment of the music industry today and his inspiring advice to aspiring musicians, producers and label entrepreneurs was (almost) as amazing as the audio-visual interludes showcasing his classic work. (LC)

Moonface was as intense a live experience as I’ve seen in quite some time. Spencer Krug has been gradually stripping away his set-up since the Moonface project began, but this time it was just Krug, a piano, a cup of whiskey and his most heartfelt, direct lyrics yet. His in-between song banter was also hilarious — who knew he was such a funny guy? I intend to break out the fanciest whiskey I can muster the day Moonface’s next record, Julia With Blue Jeans, comes out. (EL) ■