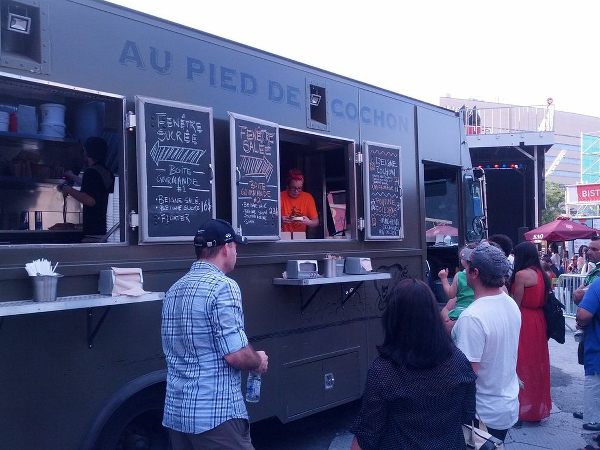 In many cities, street food is a convenient, attractive alternative to food court fare. In New York, for instance, pretzels, sausages and Middle Eastern food can easily be had on a corner. And in Toronto, a hot dog is always an option. The nuts and bolts of the endeavor — finding a truck or cart, ordering the food and so on — are an afterthought.

Montreal, however, is not quite there yet. While we’re clearly enamoured of street food — just look at the amount of ink, this column included, that’s been spilled on it — it’s still not nearly as convenient as it should be. Actually locating it, buying it and, yes, eating it require more strategy than I’d become used to elsewhere. It’s almost self-defeating, both in the chaos it seems to inspire and the cost of the food itself.

A couple of weeks ago, my usual companion and I trekked to the Quartier des Spectacles, by Place des Arts, with one gluttonous intention in mind: to eat a lot. Most of our city’s newly legal food trucks have been parked there throughout the summer, catering to the festival-going crowd. I don’t know how many people were circulating about the trucks, but in our super-hungry state, it seemed to be somewhere in the neighbourhood of a sea of humanity.

As is the case with hungry people faced with overwhelming choices, tempers flared. As I ate the chips that accompanied my slider from Winneburger, a woman stared over my shoulder and demanded to know where I’d gotten my meal. A friend, while chewing her food, faced a similar line of questioning from an anxious tourist. “What is that? Where did you get it? How much is it? Is it good?”

That last question is open for debate. Yes, a lot of what’s on offer from the food trucks is good. Le Cheese serves some of the best mac ‘n’ cheese I’ve ever eaten. And Pas d’cochon dans mon salon’s oysters (three for $5.75) were a naturally perfect street food, given that they require no utensils.

Other trucks didn’t seem like such a deal. Three dumplings from Dim Sum ran between $4 and $6, while a high-end poutine — thanks to a canard confit topping, foie gras and red wine sauce — cost about $11.

And some stands just weren’t worth it. Does anyone really want to wait in a long line only to have to search for a seat after the fact, even if the food they’re waiting for is from Au Pied de Cochon?

For us, this sort of process colours the entire food truck experience. The freedom to eat decent food outdoors is nice, but the line-ups and waiting — and the frantic behaviour they inspire — are not. More frustrating is the city’s decision not to let the trucks station themselves on streets like Ste- Catherine and St-Laurent, where, you know, hungry people might want to eat. (For more on that, see our interview with the co-founder of Chaud Dogs.)

So will we continue to order from the trucks? Sure. But next year, maybe we as a city will get over their novelty — kind of like we did the Bixi. And maybe the city will one day loosen up its regulations and let us enjoy them on better terms. ■