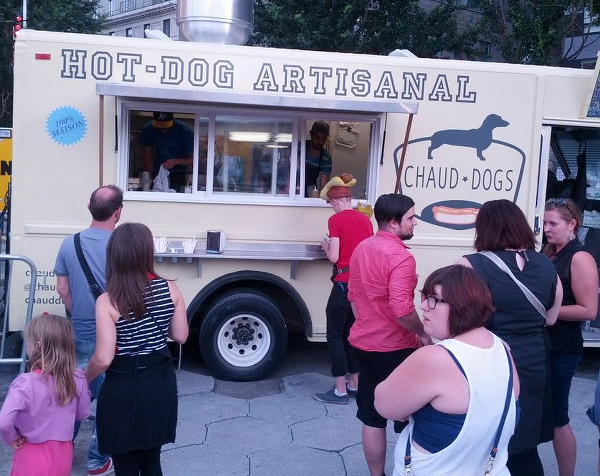 With summer coming to a close (sorry for the reminder), we thought it would be a good time to see if the tightly regulated street-food industry (which we opined upon here) has suffered from all the restrictions imposed by the city. Tays Spencer, co-founder of Chaud Dogs, which specializes in — you guessed it — hot dogs, told us that our fears were unfounded.

Gemma Horowitz: We’ve heard that the city made it difficult for the trucks and that a lot aren’t doing well.
Tays Spencer: I actually haven’t heard that. It’s news to me. I have no complaints. There are a bunch of variables. And I can’t say that the city is at fault for that at all. They’re trying to find spots that aren’t infringing on other restaurants. So they were careful where to position us so that we don’t upset restaurant owners.

GH: That doesn’t seem to be a concern in other cities.
TS: I think the difference between Montreal and other cities is the density of the population. Toronto, for example, has a lot more restaurants than Montreal. The population is more dense in the metropolitan areas. So I don’t think there was a grave concern. Whereas here,  it’s a smaller community, and they [restaurants] have a bigger voice.

GH: Are you able to hit most of the spots you’d want to hit?
TS: I know that they’re playing fair and making sure that everybody gets their busy areas. But I think it’s pretty obvious that Place du Canada is busier than the Belvedere Mountain, for example. And I think that every truck will have their opportunity to get to the busy places.

GH: What happens after September 29, when trucks have to be off the streets?
TS: Our truck will keep on trucking. We have events that we’re planning. We’re talking about doing a bowling league with other trucks. We’re open for catering jobs.

GH: I’ve heard complaints about food-truck pricing. Do you think the prices are justified?
TS: For the most part, they are. We do most of our shopping in the markets. So we are buying market-price foods.

GH: Do the permits drive up the cost?
TS: No. Those are overhead costs. Every restaurant has permits. It’s not the cost of running a food truck that makes people price their items the way they’re priced. If anything, having a food truck costs less than having a restaurant. We priced it according to our ingredients that we pay for. There’s a certain logic as to how much money we should make for a product we sell.