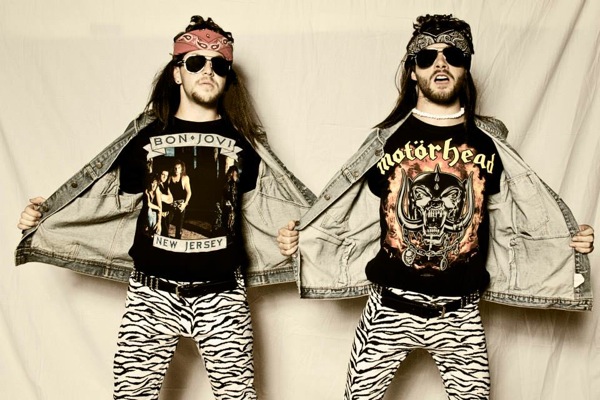 Zachary Guttman and Sean Colby in A Comedy of Errors. Photo by Joseph Ste. Marie.

Shakespeare and summer go together like fake ID and sugary clubs on the lower Main. Turns out Repercussion Theatre’s A Midsummer Night’s Dream wasn’t last call at the bar of the Bard this summer. The Montreal Shakespeare Theatre Company (MSTC) has taken A Comedy of Errors, ‘80s rock tunes and hit “ice crush” on its creative blender. The result is a Shakespearean rock musical playing this month at Cabaret du Mile End. MSTC’s executive director/musical director Ace Lopes and artistic director Aaron George talk about their upcoming production.

Rachel Levine: What’s the gist of the show?

Aaron George: In our version, the show is set in modern Ephesos. We didn’t change it to New York or L.A. Ephesos has a feud with the neighbouring city of Syracuse, and the law says that if you come from one and go to the other, you get killed. Two sets of twins, each separated at birth, are living in the two towns. Each member of the pair doesn’t know about the existence of his brother. It’s about the confusion that ensues when one group comes to the town of the other.

RL: What changes did you make to the original?

AG: A Comedy of Errors is a silly, stupid play so we decided to set it in the silliest of decades, the ‘80s.

AG: We’ve made a Shakespearean rock musical. The actors break into song like any musical. We were aiming for the ‘80s rock style — Bon Jovi, Journey. We spent two years doing serious Shakespeare in the summer, and it is depressing. Death, death, death. This one has a more relaxed attitude.

AL: We changed the clothes too. Neon clothes. We also have a live rock band onstage.

RL: Did you change the original language at all?

AG: We didn’t rewrite the play and it runs a little longer than the original with the music, but A Comedy of Errors is Shakespeare’s shortest — around an hour and a half. We added songs whose lyrics fit in with the mood. After all, we don’t want people singing “The Final Countdown” for nothing.

RL: How did the actors and musicians respond to the changes to the original?

AG: It’s a different experience for the musicians. Most musicians are not used to following a script, but they picked it up right away.

AL: Acting and playing music are different. Some actors were outside their comfort zone, but it’s like anything — with practice and time they become more comfortable and more confident in their singing. They pretty much nail it. Some will never be singers, but they certainly nail what we need. They’re doing really well.

RL: What should an audience expect?

AL: You’ll have a great time. It’s fun and silly. You’ll know all the songs for sure.

AG: People can come for the play as well as the music. Obviously, you can’t please everyone or you will fail. But if you do come for the music, you will get just as good a show.

AL: It’s in a bar. If people don’t like it, they can get drunk. There’s something for everybody.

AG: We did it this way, too, because theatre can be fun. It doesn’t have to be stuffy and all about “What would Shakespeare want?”

AL: We like to do fun shows. Nothing too artsy-fartsy. We do shows that we enjoy. ■