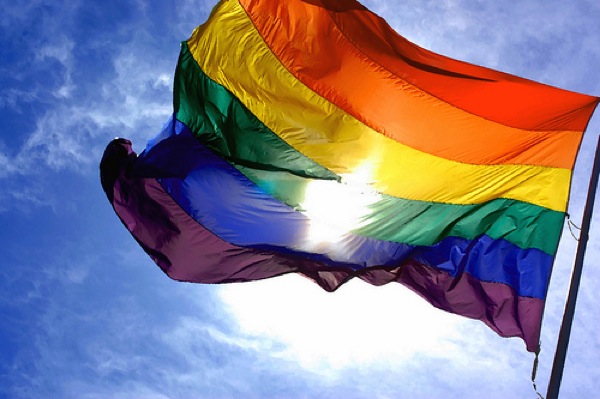 As Cult MTL‘s token gay, I thought I’d help you wade the waters of Montreal’s pride weeks. And yes, I do mean weeks. Unlike other cities that boast a single week of festivities, Montreal scoffs at a mere seven-day series of events and instead offers three festivals, spread across almost three full weeks, celebrating diversity, perversity and pride.

Tagline: All Together Different
Mission: Divers/Cité is an arts and music festival that illustrates and celebrates the value of diversity in a spirit of sharing, solidarity and openness with the world.
Cost: They offer a Friends of the Festival bracelet for $15 that includes three free events and a discount on others. Ticket prices range from $15–$69.
The Gist: All of the DJs, all of the dancin.’

On Aug. 1 I would suggest throwin’ on your bathing suit and heading down to Place de l’Horloge to enjoy some sweet tunes by locals Alain Jackinsky and Nico Concerto.

Then, Aug. 2, you can welcome riders from the Friends for Life Bike Rally who’ve made the journey from Toronto to Montreal over six days to raise funds for people living with HIV/AIDS. Stick around for Cargo, with performances by the U.K.’s Pagano & Tom Stephan, DJ Mark Anthony and DJ Alberto Perez, followed by New Society with tunes by L.A.-based duo Infected Mushroom, Project Offset and Raneem.

You can also head back to the beach for Lesbomonde à la plage, featuring Denise Benson (Cherry Bomb) and local DJ Tizi, or check out Hector Romero (Def Mix) at Peopl.

Aug. 3 has the Sunset Def Mix Party, toasting 25 years of the Def Mix label, including David Morales, Frankie Knuckles, Hector Romero and Brazil’s DJ Memê. Now in its 16th edition, Mascara, la nuit des drags (hosted by Mado) promises to be one of the largest drag queen shows in North America, and the D/C Party brings back DJ Memê and Ana Paula, as well as Montreal’s Stephan Grondin.

In the evening you can check out D/C @ Apallon, featuring Spain’s DJ Manuel de Diego and Windsor’s Josh Karmin. Then head to the final event, the D/C Ball with Mexico’s Isaac Escalante and Miami’s DJ Abel.

Tagline: The Underside of Pride
Mission: Pervers/Cité is a collectively organized festival showcasing some of the artitic and political creativity of this city’s queers. Anti-corporate to the core, it tries to open up a public space for community discussion and participation.
Cost: All events are free or suggested donation.
The Gist: Political discussion and local queer culture.

The festivals start with a Dyke March on Aug. 8, providing visibility to the more marginalized members of the community, followed by an afterparty. On Aug. 9, you can check out the opening panel “An Army of Lovers Shall Not Fail: Strategizing a Leftist Queer Movement,” which hopes to set the political tone of the festival, and Plus ou Moins, which is a conference on HIV access and representation offering two days of panel discussions. (Then you can let your hair down at the Dirtbag Party.)

Speak your mind with the Heart Circle on Aug. 14, which allows for confidential sharing, or check out Expiating Stigmatic Guilt, which explores queer traditions in the margins of mainstream queer culture. Celebrate the launch of Mexican webzine The Beef at Pompe 4 Pervers/Cité: Pride is Dead on Aug. 15. Aug. 16 offers Trans Lady Picnic, a queer art show at Rats 9, and Vivarium at Notre Dame des Quilles — for party animals only.

The fest winds down with the Queer Between the Covers book fair, highlighting queer reading materials, a series of workshops and the closing party Real Housewives of DOMA on Aug. 17. The fest ends on Aug. 18 with Grassroots Yoga, a short class and conversation with a Chillout BBQ post-parade at Touski.

Tagline: Our Flag, Our Life: Red
Mission: Montreal Pride is organized each year to celebrate the legal and social advances made in Quebec and in Canada, while underscoring the fact that much work remains to be done around the world. Each year, the Pride program has three main components: community and LGBT human rights, cultural events and shows — and, of course, the Pride Parade.
Cost: Some of the events are free, some require a $5 Pride bracelet and others cost $5—$40
The Gist: Parade, drag queens. Did I mention a parade?

The fest kicks off on Aug. 12 with a Queer Comics conference and a screening of Trans. The tower at the Olympic Stadium will be illuminated with the colours of the rainbow.

Aug. 13 offers an exhibit of Tiery B.’s photography that runs to Aug. 18, a retrospective on the iconic Montreal event Meow Mix that runs to Aug. 16, and Full Rouge, an evening with drag queen Mado. On Aug. 14, you can check out online lesbian news magazine Lez Spread the Word‘s 6-à-9, while the Cliks play Cabaret Underworld. There’s also, of course, the ceremonial raising of the flag, this time with the flag’s creator Gilbert Baker in attendance.

On Aug. 15, head to the Royal Pheonix for Scissor That, the city’s newest lesbian party, or check out Subwoofer and the Deep Water Wigs, an exhibit by L.A. photographer Tim Tadder, followed by DJs and dancing. On Aug. 16, you can check out the official Boys Party at Apollon or head to Crush at Club Soda for the all-girls party.

The weekend offers the Pride Run on Aug. 17, followed by a Dyke March, C’est la fête, with a special performance by RuPaul’s Drag Race winner Jinkx Monsoon, a fetish party Pig, la nuit des BEARS at the Stud and alternative dance party Shiny, Shiny Gold at the Royal Pheonix, all leading up the Pride Parade on Aug. 18. ■