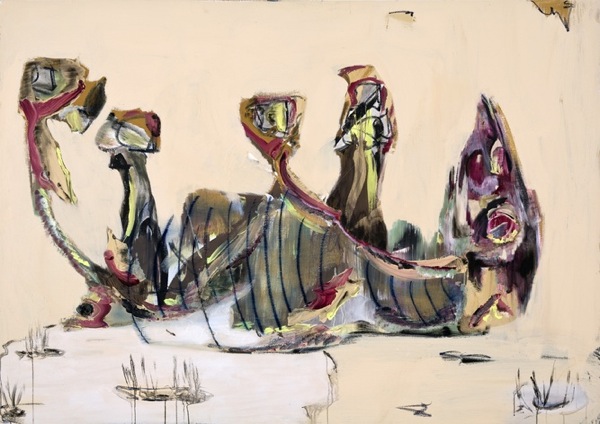 Manuel Mathieu only realized what he’d sown once he started reaping the field. After years of intense production, he curated his upcoming show The Birth of Nature at Galerie les Territoires from paintings and illustrations dating back to 2011. True to its name, the resulting works share an interest in animal and human nature that emerged organically in Mathieu’s practice. That’s part of the game — and most of the point — for an experimental painter.

“Going into the studio is kind of like swimming in the sea. You go in but you don’t know how you’re going to get out,” Mathieu says. “When you fail, it’s the worst feeling. When you succeed, you can’t sleep at night. Painting is the only thing that has ever given me that feeling.”

It’s an emotion that transfers to Mathieu’s canvases, which have earned the 26-year-old a worldwide audience. His 2012 MAI show PRÉMICES/OPEN-ENDED and his recently published monograph Abysse/Abyss have added widespread local success to his showings in the U.S., France and Haiti, the country of Mathieu’s birth.

Despite his successes, Mathieu is up front about the spontaneity of his practice. Although de Kooning is an inspiration for this latest show, Mathieu’s style results mostly from an aversion to intentionally creating one. The exchange between his somewhat brusque abstract brushstrokes and detailed figurative elements makes Mathieu’s work unmistakably — if not his — then its own.

“Emotions go through you and change you. Painting is the residue from those experiences,” says Mathieu. “As an experimental painter, you have to let go most of the time, because things happen when you least expect it. The best paintings I have done were over quickly. I don’t even really remember how it happened.”

If it’s possession Mathieu is describing, he’d liken it to the Ancient Greek idea of the genius as a creative force, guiding and inspiring the body it enters. But the urge to create unfettered from self-imposed judgements or rules also speaks to The Birth of Nature’s animal side.

“I was reading that our birth is the moment when we’re closest to animals. We don’t tend to watch or look at human birth because it’s so physical, it’s emotional, painful and raw,” says Mathieu. “But if you look at a human infant and a calf that’s just been born, trying to stand, you see the similarity. Little ideas like that led me to explore bigger ideas when putting this show together.”

After the period of reflection in assembling The Birth of Nature, Mathieu is eager to begin painting at Goldsmiths University in London this September as part of a Master’s program for studio production. His time away from the easel was spent executing conceptual projects like “Act of God,” a white-on-white seismic reading of the 2010 Haiti earthquake, or “Whisper,” a project in which children re-wrote the last statements of executed prisoners. Still, Mathieu says, painting can be conceptual, too.

“Painting leads me to concepts, ideas and places I don’t fully understand yet. There’s a vocabulary that emerged for me with this show, and it’s going to keep evolving,” Mathieu says. “Remember how I said the studio is an ocean? Really, I haven’t even entered the water yet. I know I’m going in, but I’m still looking at bathing suits, spreading the word — ‘Hey everyone, I’m gonna go in.’ There’s so much more to come.” ■