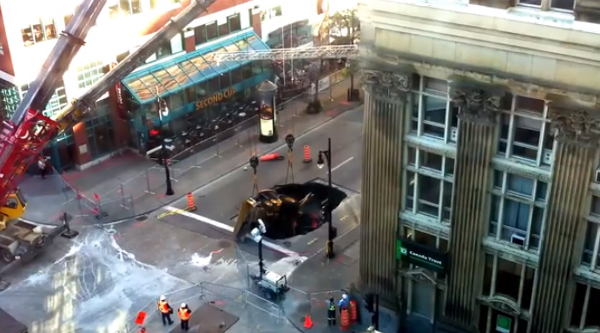 Montreal Maine and Atlantic Railway, a company you may remember from such recent disasters as Lac-Mégantic, has been granted permission to file for bankruptcy protection. The firm, chaired by the ever-misguided Edward Burkhardt, was only allowed $25-million in liability insurance, a sum that won’t exactly cover the claims against it, among them $7-million in thus far unpaid clean-up funds to the town of Lac-Mégantic. A class-action suit against the beleaguered company won’t be able to happen for a while.

Speaking of apparently inexplicable fuck-ups, in case you missed it, a backhoe fell into a sinkhole at Ste-Catherine and Guy on Monday. At least one engineering consultant, who happens to be a former chair of the Montreal executive committee, was not exactly taken aback. Jean Fortier said he was “not surprised it happened” and he doesn’t “believe there is enough monitoring” of these things. Officials think antiquated (natch) sewer pipes may have been responsible for the street collapse.

In other baffling (though, really, who are we kidding?) news, a space the Montreal police department rented to house its anti-gang unit is owned by — wait for it — a convicted drug dealer with Mafia connections. The building in question, at Papineau and St-Zotique, is the property of the Armeni Family Trust, whose directors include Vincenzo Armeni, a man serving a 19-year prison term for drug trafficking. (The other director is his wife.) The space has served as an admin spot for the cops since 1998. The lease, which expires in October, will not be renewed. If you’re looking for an explanation for why the cops were there for so long, the city cannot dig into a landlord’s criminal past.

Huntingdon mayor Stéphane Gendron may not like cats, particularly those of the stray variety, but we were heartened to see that he’s open to a Muslim cemetery — Quebec’s second — in the city.

Finally, this is still horrifying. ■