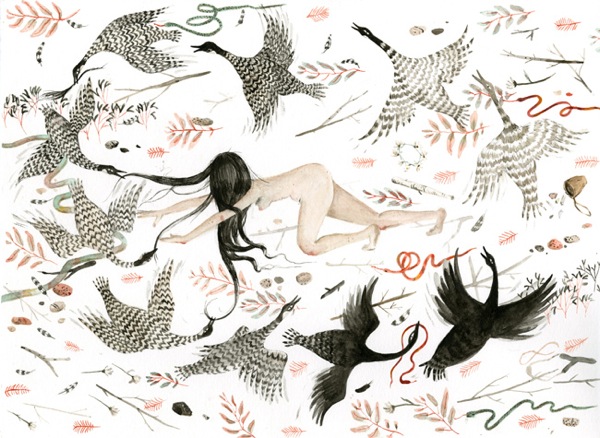 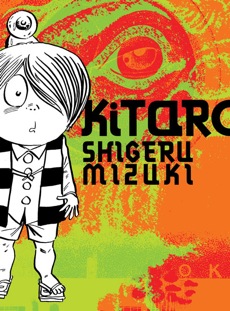 At first glance, the hero of Shigeru Mizuki’s Kitaro appears to be a normal child. As the stories in this nearly 400 page collection unfold, however, Kitaro is revealed to be anything but normal. He lives in a cemetery, can measure “spirit energy” with his hair, houses his eyeball-shaped father in his left eye socket and wears a vest made out of the hairs of his ancestors. He’s also a yokai, or Japanese spirit monster, and is several hundred years old.

Kitaro’s creator Shigeru Mizuki is a pioneer and master of manga who is celebrated in Japan but has been largely unknown in North America until recently. Fortunately, Mizuki’s work has been made available to an English-reading audience by Drawn & Quarterly, who have begun to release handsome and affordable translations of his greatest works. Kitaro is the third in this series, following his war tale Onward Towards Our Noble Deaths and his memoir of childhood NonNonBa.

Kitaro, originally published in the 1960s, was Mizuki’s first major commercial success, and its appeal to a wide readership is evident. Mizuki’s artwork depicts cartoonish characters in beautifully rendered landscapes, and his storytelling mixes ghoulish folktales with comic strip humour.

These stories are deeply embedded in Japanese folklore, a mysterious world populated by millions of monsters known as the yokai, spirits who populate the countryside and get up to trouble. Kitaro is a superhero yokai, an immortal boy who, along with his eyeball-shaped father, protects innocent humans from the mischief and evil of his fellow monsters. These tales are great fun, mixing the antique world of Japanese folklore with the country’s culture during the 1960s. Kitaro plays midnight baseball with a team of ghouls, defeats countless evil yokai through the use of numerous superpowers, and, in a nod to the science fiction movies of the day, he is even transformed into an enormous monster who fights a giant robot in Tokyo.

Although Kitaro was clearly intended as mass entertainment (and remains enormously popular in its home country), these stories are durable, and Mizuki’s cartooning is brilliant in its range and invention. These richly-illustrated picaresque tales are filled with high drama, lots of laughs, terrifying monsters and the occasional side-trip to Hell. 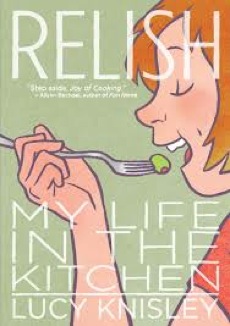 New York cartoonist Lucy Knisley’s graphic memoir Relish illustrates her lifelong enchantment with food. In the very first panel, Knisley draws herself as a baby sitting on a kitchen counter and sucking on a round of brie, stating, “I was a child raised by foodies.” The daughter of a food-obsessed father and a caterer mother, Knisley details her culinary fixations from a lifetime of good eating, including everything from her first taste of foie gras as a child to her adolescent rebellious streak when she ate the junk food that her parents abhorred.

The stories that Knisley creates around these childhood and adolescent anecdotes are often more sweet than sour, and they are occasionally cloyingly saccharine. In other instances, Knisley seems to be bragging about her upper class roots, describing childhood international trips to Mexico, Italy and Japan, without any acknowledgement of privilege and exhibiting the annoying foodie obsession with “authenticity.”

Despite this, Relish is a compelling read due to Knisley’s brilliant Hergé-like clean line illustration style. The 12 chapters of the book are panelled in a graphic narrative style, and each concludes with a more free-form illustrated and annotated recipe related to the story. Her flawless style as a cartoonist, presented here in brilliant full colour, makes Relish a joy to consume. 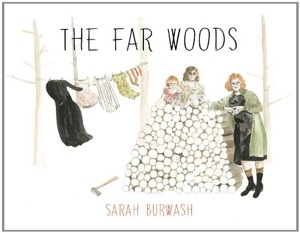 The celebration of the close communities formed by making food with friends and family is echoed in the work of Halifax-based visual artist Sarah Burwash. Her new art book The Far Woods collects illustrations exploring the intimacy of close communities, primarily in rural places. Burwash’s quiet drawings employ muted colours and open spaces, beautifully suggesting the expanses of the countryside.

While many of Burwash’s watercolour drawings depict rural places, she doesn’t glorify them but instead emphasizes the hard work required to live in the country. One illustration features several women hunched under the weight of heavy bundles of sticks. Another series of drawings, of a cabin on fire, express another form of rural precariousness.

Burwash also celebrates rural forms of artistic expression. One of the most resonant images in the book features women and children gathered proudly in front of a new quilt hanging from a line, a community commemorating the countless hours of work that created this practical art object. Two images near the end of the book emphasize the centrality of women’s domestic labour to the workings of the world. In one, a woman sits sewing at her machine while the cloth that she’s working on turns into an ocean populated with tall ships exchanging cannon fire, along with whales and sea monsters. In the other, a woman in a rocking chair knits a landscape that becomes a typical Western scene of mounted cowboys and small settler encampments.

Throughout The Far Woods, in beautiful watercolour and ink drawings, Burwash examines without nostalgia the struggles and joys of life in rural places. ■