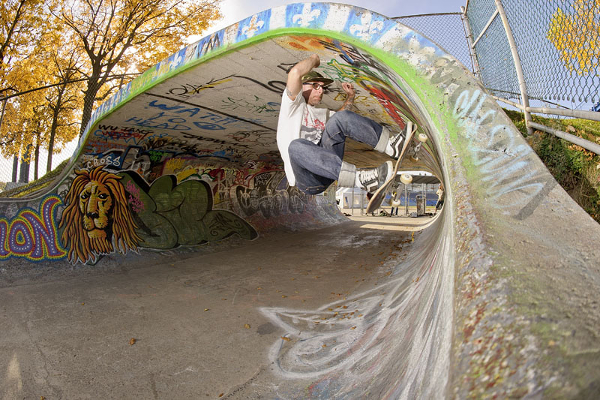 The lifespan of a skateboard spot seldom exceeds a few years. We’re not talking about skateparks, the sorts of spaces cities build to contain skateboarding, but structures — ledges, embankments, stairs, whatever — that are perfect for it. The Olympic Stadium is one example of this architectural serendipity. While other areas that draw skaters run a distinct course that unfailingly sees their co-opters banished from the premises, the iconic spot, a concrete full-pipe that spills into a halfpipe, has been sessioned for decades.

A couple of years ago, a plan to expand the nearby Saputo Stadium placed the pipe in peril. Rather than level it, though, the Saputo family chose to move all 125 tons of it to a safe locale 25 metres away from where it originally sat. Now, two years, $200,000 or so and a delay or two later, it’s ready to be skated again — which is precisely what will happen at the official Big-O Rebirth this Sunday. We spoke to Barry Walsh, who has ridden the spot since the ‘80s, about what it means to Montreal’s skate scene.

FIRST IMPRESSIONS
My first impression when I saw the pipe was just, “Wow, this thing is so crazy natural perfect for skateboarding.” But at that time, I was just sort of a complete beginner, as far as skating something so challenging. So after years of skating it, we started to get more of a groove. But it was just overwhelmingly mystical. It was just too perfect.

OG RIPPERS
At the time, back in the day, it was this guy named Ri Abderrahmane, Orion, these two French dudes Alex and Pat, and then basically just random locals. But the thing is, back then, when it had the track rubber on it, you could really only drop in and hit one-trick walls. It took years before people started to go back and forth and flow.

TAMING THE BEAST
It’s one thing to do a trick there, but it’s another thing to flow and keep a consistent line going. It’s so slingshot fast. We’re still essentially riding a wild structure. The fact that there’s no deck on it makes it extremely dangerous. I’ve seen people borderline break their back at the Big O when they get crunched in between the fence and in the back of the quarterpipe. I’ve seen kids that don’t know what they’re getting into drop in and go right for a pivot, and they just slip right over the deck to double-shinner faceplant in the flat.

SAVING THE SPOT
In 2006, [the spot] was in jeopardy because they were building the Saputo soccer stadium. They chose the Big O, so we were like, “Oh, shit.” So they finally build [the stadium], and [the pipe] comes within inches of being destroyed, but luckily the plans didn’t go into the zone. So then, in 2011, they say they’re expanding the stadium. So this time they’re saying it is in the way and it absolutely has to be moved. So again it faced destruction. So the locals banded together — a handful of locals — and went to city council meetings and showed the book [Pipe Fiends: A Visual Overdose of Canada’s Most Infamous Skate Spot, published in 2006] to Joey Saputo. And when Mr. Saputo saw the book, he said there’s just way too much history here — we have to save it rather than destroy it. And he chose to have it moved. It was successfully moved, and history was made. We owe big thanks to the Saputo organization and the Impact organization.

LONGEVITY
It’s basically a dream that it’s even still there. It’s a total blessing because all these classic spots, they sort of have their time and their era, whereas the Big O has continuously amazed skateboarders all over the world by still being there and still being skateable. So as a Montreal local and pipe fiend, I’m extremely humbled and grateful that our spot can still be here. And the fact now that it’s being saved as a historical skate spot is just beyond a cherry on top.

CHANGING TIMES
The one era that defines skateboarding to me is definitely the ‘70s and ‘80s, even though I started skating in ’83. That was the roots-rock essence era, where it was about the essence and not the hype. It was when skateboarding was dirty and it was backyard and it was about skating your boards until there was no nose and tail left. It was more about style and flow and the culture, whereas today it’s all over the place on TV and advertising. In the ‘80s, the culture was still very pure, and it was about doing it, not pursuing it. And I sort of went back to that realm after 20 years in the skateboarding industry, and the Big O has also kept us grounded because it’s part of skateboarding — it’s not part of the skateboarding industry. It’s an open culture. The Big O is a skateboarders’ spot. It’s 100 per cent natural. It oozes the essence. ■