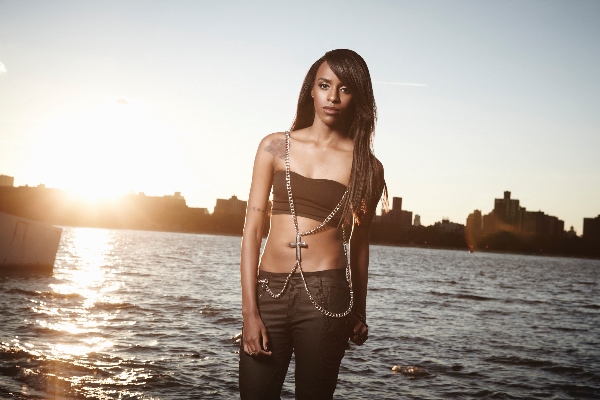 Angel Haze is rising. At 22, the Brooklyn-based rapper and singer is signed to a major label (Universal Republic) that’s going to release her debut record (Dirty Gold), a project she’s been working on with the likes of Markus Dravs, Greg Kurstin, Mike Dean, Naughty Boy, A Tribe Called Red and Sia.

She also earned near-tabloid-level notoriety by getting embroiled in a beef with Azealia Banks last winter. The tweet-off and diss-track tit-for-tat began when Haze interpreted Banks’s comments about “non-New Yorkers claiming NY” as a dig at her. “The fire’s been extinguished for me,” Haze says, though she guesses that festival programmers (including Osheaga, possibly) have been purposely scheduling the rival rappers on different days, “’cause they think we’re gonna kill each other.” [As announced yesterday, Azealia Banks has cancelled tonight’s scheduled Osheaga set due to a throat infection.]

Then there’s her background. Haze was born Raykeea Wilson in Michigan, and moved with her mother and brother all over the U.S., from California to New York, Pennsylvania to Virginia. In interviews and on her Reservation and Classick mixtapes, she’s been very frank about suffering sexual abuse and growing up under the thumb of an oppressive religion, facts that add import to the violence, blasphemy and stone-cold nihilism that figure prominently in her lyrics and videos.

She’s also been more open than most of her rap/R&B peers about her sexuality—pansexuality, for the record, meaning openness to guys, girls and people of alternate or mixed-gender identities. In a month-old YouTube video directed at fans, wherein in she rants and laughs about life on tour, she says she’s been “travelling around the world and fucking more bitches than I can remember.” (She also says she’s joking, but I prefer to think she’s not.)

Haze is based in Brooklyn now, but when I called her a couple of weeks ago, she was working on wrapping up her record in L.A. The conversation began exactly where you’d think it would.

Lorraine Carpenter: You’ve compared the religion you were raised in to a cult. Tell me about that.

Angel Haze: It was Pentecostal Apostolic, actually. Before I got into the real world, which was only a couple of years ago, I didn’t know anything about cults. But I saw a couple of documentaries, one of them about the Westboro Baptist Church [of “God hates fags” infamy]. They’re fucking mental. They’re an exact replica of the church that I grew up in.

LC: So not exactly accepting of people with non-mainstream sexuality.

AH: My mom made sure we would never have the opportunity to do that. I didn’t get a cell phone till I was 16. The Internet was, like, childproof. The only way I got to hear music legitimately was from films. All of my favourite music I learned from watching films like A Walk to Remember or Bring It On [laughs]. Or, like, listening to some movie that had a Smiths song playing in the background, and I’m like, “Wait, what is this?”

And once I turned 16, my mom was like, “You know what, screw it. You guys can just do whatever you want.” The way I learned what I actually liked was by remembering and re-watching these films and saying, “Yeah, I love this song,” and then doing A-Z Lyrics searches, and finding bands and rappers that are similar to the ones that I like. My musical taste is so broad—it’s, like, every freakin’ thing you can imagine. I was just so desperately hungry for it that I didn’t even care what it was. I just wanted to listen.

AH: [laughs] What? No. Angel is something that is high in a spiritual realm, and Haze is a strand of weed. It was just a metaphor for being high, and being pretty much better than everyone [laughs].

LC: What made you want to become a rapper?

AH: Oh, wicked. So I was in 10th grade, and I knew this kid who really, like, desperately, wanted to be a rapper. Like everything about him, he breathes it. He woke up in the morning, and he was it, you know? We became best friends, and I was all about poetry so he was like, “You know, it’d be pretty cool if you could turn your poetry into rap.” And I was like, “Yeah right, I have zero rhythm.” So like, for the first year and a half, I tried it, and it sucked. It was terrible. If anyone found those tapes and things that I did, I would cry. But eventually, I got better, right?

Tumblr is really a great gateway for people who are trying to be noticed, or it used to be back when it wasn’t so polluted by hipsters. So I started putting up all these freestyles on Tumblr. I did a remix of “Fall for Your Type” by Drake, and then I got an email from this guy who managed Das Racist. I went to New York and he threw me on stage in like 15 minutes, and I was like, “What the fuck?” I just left the stage the first time. It looked bad.

LC: So that was two years ago? From what I’ve seen, your live show is tight now. Was it just a matter of practice?

AH: It was a matter of me with a hairbrush in the mirror saying, “This is what I’m gonna do next time.”

LC: I understand that you’re part Cherokee, and you taught yourself to speak the language. What inspired that?

AH: I’ve been speaking Cherokee since I was 15. It’s still a really tough learning process ’cause I don’t have anyone to speak it with, unless I’m in North Carolina or Oklahoma or something.

My mother didn’t raise us to be anything—not black, not native, not Creole, not anything. And we didn’t have any regard for any of that shit. At school, the black kids said I wasn’t black enough, and the native kids said I’m not native enough and blah-blah-blah. For me it was just learning and having another tool I could use, honestly. It’s not really about cultural relevance. I speak Spanish, too, and no one gives a fuck about that.

LC: Why are you such a badass?

AH: It’s the only way to be, dude [laughs]. Badasses have way more fun than goody-two-shoes. I’m just a free spirit—I just do whatever I want whenever I want. I’m gonna die anyway, and I don’t wanna regret it. ■