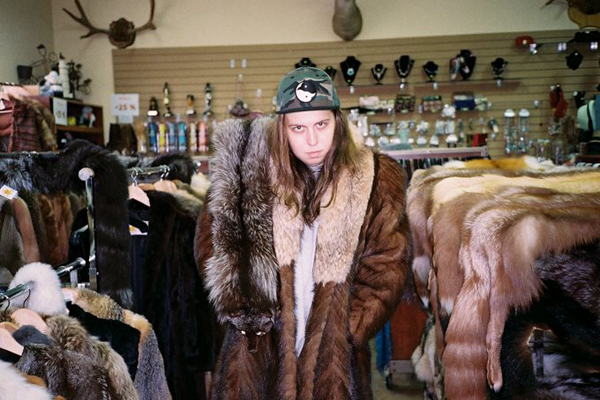 If you’ve done that thing called “going out and having fun” in Montreal in the last two years—especially if your definition of fun is getting fucked up and dancing to rap sub-genres—you’ve seen his face behind the booth or on that shirt with a weird-lookin’ dude with a huge joint danglin’ from his lips.

That dude is Tommy Kruise.

Kruise is pretty much everywhere right now, doing everything from spots at events like Boiler Room MTL to gigs in New York City. Last year, the DJ and producer dropped Memphis Confidential Vol. 1, a seven-track EP his Bandcamp page calls “straight Memphis buck gangsta beats for the stoners.” And currently in the works are a record on Vase, Jacques Greene’s label, and a hush-hush project that will see him collaborating with American rappers.

As Vice put it, “If you’re not familiar with Tommy Kruise yet, you’re not really paying attention to small-town Québécois beatmakers.”

ON CITY VS. COUNTRY

I’m not from Montreal, that’s a sure thing! I grew up near Mont-Sainte-Anne; it’s called Ville de Beaupré. I was out there and had no musical background—just my father listening to Peter Gabriel. I picked up music, but just as  a fan.

You know, I’m a skater first, so I was really interested in Montreal because of the [local] skate movies that I would see. So moving up there really became a priority back  in the day.

Now I kinda miss all of that nature and farms, now that I live in the city, but I guess it was a good move because now it makes me enjoy what I always had. It’s been four years since I moved to Montreal.

[Just recently], I wanted to escape the jungle and go to nature, so that there’s no one calling you like, “This shit is popping tonight!” or no girl calling you like, “Come hang out tonight!” I was able to finish up some product, some demos for people. It’s really something that inspires me, to be alone, because I’m someone that’s always surrounded by people, so being alone, it’s easier to work on shit.

First year of high school, I was still into metal, punk and hardcore. Emo wasn’t even that big at that time. But in my second year I remember hearing a bunch of rap, a bunch of golden-era shit that got me really into it. And then, I don’t remember how, but I got a CD with a whole bunch of Three 6 Mafia tracks on it. That was pretty much the turning point for me. I used to be rocking punk shirts, long hair, all dressed in black, and that was my shit. Within a year, rap was my  mood music.

I’ve always been a dude that tries to make people connect even though they have differences. I listened to punk, but even when I was young, I was on that Ninja Tune shit—Amon Tobin, Mr. Scruff, DJ Krush, all that shit. I was buying fucking $24 CDs with my paycheque from IGA. That downtempo shit was super big when I was 15, 16.

So you shouldn’t deny a style.

My mom called me Tommy the other day, and I was like, “Nah, nah—you’re not calling me Tommy.” I wasn’t really stoked about that, but my parents are happy. My father, everything he sees in the papers and stuff like that, he gets super stoked. They use Facebook, and my mom started using Instagram, and she’s following me and my adventures. So it’s kinda cool, and they like it. They’ve been supporting me since the beginning  of it.

Because black people have been listening to it for quite some time! I guess that’s the word. I think some people just discovered it. But it can be rap, it can be trap, it can be hip hop—there can be a part of any style that you didn’t know of. But I guess it’s some unexpected shit when you see Miley Cyrus and Justin Bieber acting all weird. Miley Cyrus’s new video is a prime example of it, using black culture to make it pop.

The first time I smoked weed, I think I was 14 or 15. We went behind the school, we smoked, and it was crazy, that hour-long conversation and being high for the first time. For a moment after, I didn’t smoke. I thought, “I can’t really do this shit often.” Then I forgot about that joint.

You know, there are people I don’t even like to smoke with because they just become fucking vegetables. Or even, like, work-related. I don’t really wake up in the morning and be like, “Oh, I gotta smoke weed today!” Never.

For me, it has to be a treat. You have to get something done; you have to do your whole shit. But if you wake in the morning and the first thing you gotta do is smoke some weed—that’s not my type. It fucks up my short-term memory at the beginning of the day, and we always have to do stuff. Work is never done. Work is never, ever, ever done, so if you say that work is done, maybe you need to re-check your ambition. ■