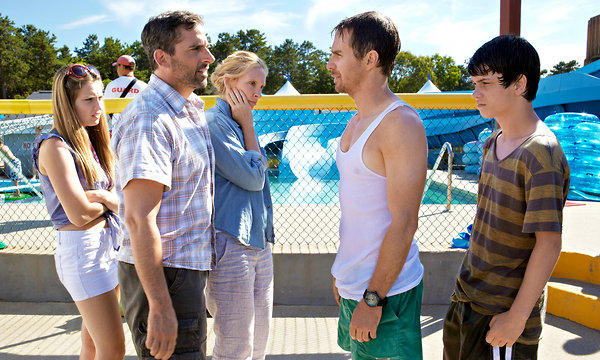 The Way, Way Back

As a kid I spent my summers on Lake Huron in cottages or trailers camping and wasting summer days sauntering between the lake and pool, my bike offering me the same freedom that a car could — if only I were old enough to drive. Summer camp/vacation films  try to capture that feeling, that first taste of freedom in childhood. But I think few actually manage to nail it. Being a kid is tough, and as fun as summer holidays can be, you’re still riddled with awkwardness, trying to assert yourself and impress others. Nat Faxon and Jim Rash bottle this feeling in The Way, Way Back.

Relative newcomer Liam James plays Duncan, an awkward 14-year-old boy whose mother (Toni Collette) is dating an absolute douchebag named Trent (Steve Carell). Along with Trent’s daughter, also from a previous marriage, they all go on holiday together to Trent’s beach house. Constantly demanding respect in the most condescending way, Trent has little interest or understanding of Duncan, and often makes that abundantly clear when his mother isn’t around. While the adults schmooze and go on day trips with the neighbours (including Allison Janney as Betty — an oversharing hilarious divorcee), Duncan starts to explore the town on his bike, finding the Water Wizz Water Park where he is befriended by the manager Owen (Sam Rockwell), and without telling his mother, takes a job for the summer.

Through his friendship with Owen, Duncan starts to find his feet since he’s finally provided with the reassurance he craves. Having someone find his awkwardness endearing, and having the staff at Water Wizz to challenge him to be the best version of himself, makes all the difference. Duncan eventually notices that one of the neighbours, Joan (Amanda Peet), seems to have a history with Trent, and his new-found confidence not only helps him in this situation, but also in approaching Betty’s attractive daughter Susanna (AnnaSophia Robb).

Liam James makes the film. Duncan is so likeable — it’d be hard to fake that level of gawky/awkward (gawkward?). Steve Carell’s performance as such a detestable character is also impressive. I thought for sure he’d steal some scenes with some kind of comedy ha-ha, but he holds steady and remains unlikeable and human throughout. I may have watched Moon one too many times, but Sam Rockwell charmed the pants off me as Owen — I don’t know why I ever questioned his comedic abilities. His concern for Duncan warms your heart and he plays the flawed 30-something stuck working a shitty job at a water park with ease. Appearances by writers/directors Faxon and Rash as Roddy and Lewis (employees at Water Wizz) are welcome as tasteful comic relief.

Yes, the film is a summer vacation comedy flick with big-name stars, and a coming-of-age tale, but you can tell that Faxon and Rash laboured over the script and gave it heart, because it reminds you of being a kid. I left the theatre feeling uplifted, remembering the funky smell of the cottage, the cedar trees outside my door and the rush of heat that’d come to my cheeks when I said something stupid.■

The Way, Way Back opens today