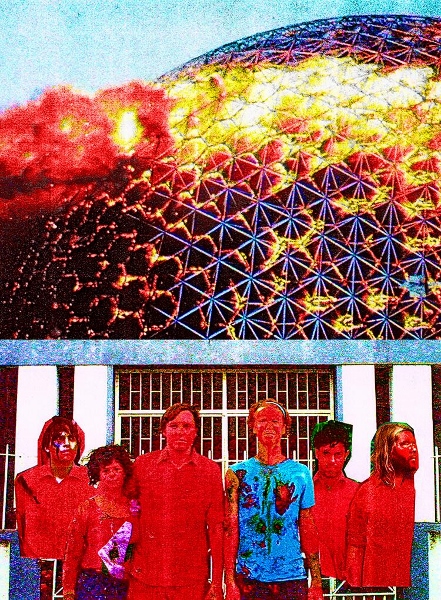 We all knew it was coming down the pike, but the new, fourth Arcade Fire album, recorded with LCD Soundsystem’s James Murphy at his NYC studio, now has an official release date: Oct. 29, 2013. The band made the announcement via Twitter yesterday, responding to a fan’s comment (“You’re my favorite”). They also attached the imagery you see above, which of course includes some local colour — a group shot (minus Sarah Neufeld, for some reason) attached to a photo of the great biosphere fire of 1976. We don’t have any tunes yet, but here’s their latest release, in case you missed it when The Hunger Games came out last summer:

Did you catch the latest live video by our favourite Arbutus bro? Sean Nicholas Savage (who opened for Solange at le Belmont on Thursday, cos she’s a fan of his) recently released a live video, directed by Angus Borsos. See it here (and catch Savage headlining at the Plant on Tuesday, July 16, with openers Jamaican Queens):

Montreal’s own  Wake Island also put out a new video this week, one that “explores the physical and emotional aspects of human weakness,” and involves singer Philippe M getting manhandled. A lot.

Local glamour puss Jef Barbara unleashed a new tune this week — the single is officially out, via French label Tricatel, on July 29, with the album Soft to the Touch to follow on Sept. 30.

And finally, 514 dude Leif Vollebekk solidifies his rep as a singer-songwriter in the classic vein by offering a free covers EP. The inclusion of Bob Dylan, Neil Young and the Beach Boys are not surprising, but Leif & co. also tackle tunes by Sigur Ros and the Killers! Download Borrowed Time here. ■