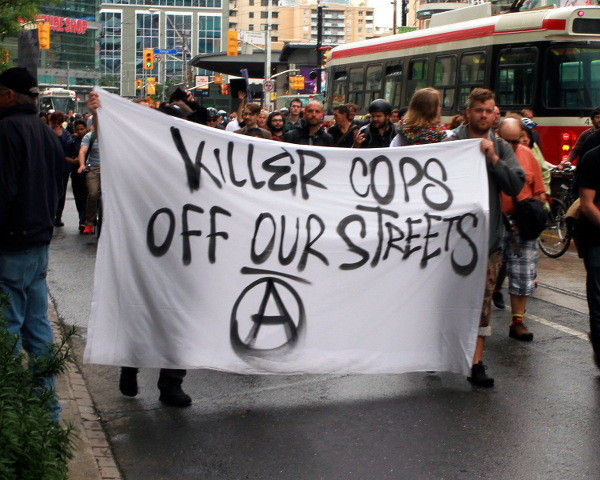 In Toronto, within minutes of an 18-year-old man emptying a city streetcar after allegedly pulling a small knife, he was dead, shot at nine times by Toronto police officer James Forcillo.

Less than three days later, in Montreal, an armed 72-year-old was engaged in a standoff with police from inside his Côte-St-Luc home for 20 hours. Outside, officers from the tactical squad were taking their time, attempting to talk with and calm the man, who reportedly suffers from dementia, in a successful effort to end the incident peacefully.

In the first case, video evidence showed that Forcillo seemed to be acting completely on his own initiative, shooting an initial volley of three shots, followed by six more as victim Sammy Yatim lay twitching on the floor of the streetcar. Several other officers were crowded around Forcillo at the scene — some with weapons drawn, some not — but only one felt the need to shoot. Nine times.

In Montreal, after the suspect allegedly threatened to shoot a Hydro meter installer, experienced negotiators and highly trained tactical officers were quickly on scene and exercising restraint, even after an officer was slightly injured after two shots were fired from the home.

Night and day. But the difference in the two incidents doesn’t stem from some innate superiority of Montreal policing tactics. Toronto, too, has specialized squads and negotiators, but the officers on scene that night didn’t even give them a chance to work. Meanwhile, Montreal also has a checkered history of quick-draw policing that has claimed many victims over the years, including an innocent bystander, Patrick Limoges, in a daylight incident in June 2011.

Since 1990, all Ontario incidents have been overseen by a civilian review board called the Special Investigations Unit.  Here in Quebec, police have been investigating their own since forever. But all that was supposed to change following the adoption on May 9 of Bill 12, which created the Bureau d’enquêtes indépendantes (BEI).

The BEI may not be in operation for as much as two years, however, because Quebec police have been effective once more in stalling any attempt to have officers be subject to common sense rules. Public Security Minister Stéphane Bergeron told the Gazette in June that consultations on the proposed regulatory framework for the BEI — rules that govern how an inquiry must be conducted — were being opposed by the Sûreté du Québec police union, so the government was trying to “adapt” to the objections.

These rules wouldn’t raise an eyebrow in crimes involving civilians, but when applied to police, suddenly they are an affront to civil liberties.

The adoption of Bill 12 received the support of all parties and was seen as a great leap forward, but if police are allowed to once more put their nightsticks in the spokes of justice, it could quickly become just another joke.

A 2012 Angus Reid survey found “58% (of Quebecers surveyed) believe the police officers in their city are not adequately trained to safely deal with delicate situations (and) 72% think the police investigating the allegations mostly turn a blind eye to the possible negligent or bad practices of their colleagues.”

Of 339 police investigations of police from 1997 to 2009 in Quebec, just three led to charges. (I was unable to find out if these charges were significant or if they led to convictions.)

Meanwhile, since the Ontario government set up the Strategic Investigation Unit in 1990, of 3,332 cases (which include alleged sexual assault, as well as deaths or injuries), only 82 charges were laid.

If you crunch the numbers, you’ll see that Quebec investigations only led to charges in .88 per cent of cases. Ontario’s SIU was three times more likely to lay charges — but its rate was still a meagre 2.46 per cent. In both cases, police representatives have argued that the low number of charges being laid is not proof that the system doesn’t work, but that police are doing an incredibly good job!

If police are truly doing such a marvellous job — and there’s no doubt that on occasions like the Côte-St-Luc standoff, they are — then they shouldn’t be afraid to have that work reviewed by an independent agency in a transparent process whenever that wonderful job leaves someone lying dead on the ground. ■