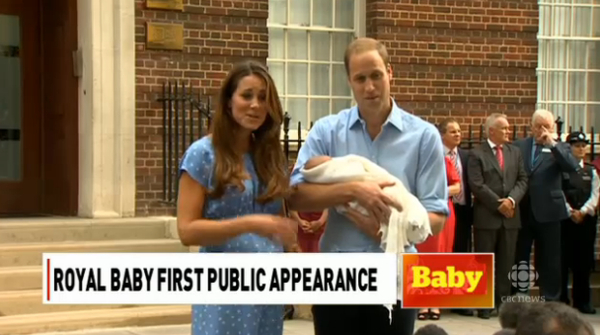 The apparent source of all the excitement

You know that there’s been too much coverage of the Bébé Royal when CBC News Network devotes part of its wall-to-wall reporting on Tuesday to a segment asking if there has been too much coverage of the birth. By then, it appears, all of the other important subjects must have been exhausted, from how William’s pale blue shirt matched Kate’s dress to how Papa, a highly educated member of the British upper class, has managed against all odds to learn the proper way to hold an infant.

And then there’s the speculation. What name will Will and Kate choose? (“We’re still working on it.”) Will his parents change his “nappies”? Will he get a proper job, or will he, like grandpa, devote his time to charities and worthy causes?

I could go on and on about the trivial nature of the coverage and the embarrassing spectacle of professional journalists fawning over the child like he’s the second coming of Christ and making inane observations about car seats and matching wardrobes. But that would have required me to watch much more of the spectacle than I could stomach.

Meanwhile, some French-language media in Quebec were instead preoccupied with another member of British royalty, Sir Paul McCartney, who was preparing a massive concert on the Plains of Abraham (where, ironically, the original British Invasion was greeted with much less enthusiasm by the inhabitants). The LCN network’s lead item Tuesday night was a major fire in Trois-Rivières, followed by stories on McCartney, Prince Nameless and, finally, Quebec’s own royal couple, René and Celine.

On Radio-Canada and TVA, however, it was pretty much business as usual, with short reports on McCartney and McBaby and insightful coverage of all the other issues of the day, including several reports on Lac-Mégantic, the latest on the firearms registry issues, the Trois-Rivières fire etc.

On the other side, you have Robert Finch of the Monarchist League of Canada, who suggested that just about everyone is excited and that anyone who isn’t must be a baby-hater. “You’ve got to be pretty cold-hearted not to be happy about the birth of a baby regardless of what your feelings are on the institution,” he told CBC.

Two weeks later, any suggestion that there’s no interest in Prince Poopy Pants is laughable, thanks in large part to the decision by much of the mainstream anglo media to crank the coverage up to 11.

In an electronic age that allows our news organizations to cover a much wider variety of issues than ever before, it’s ironic that what it has instead produced is an even narrower form of pack journalism than we had prior to the advent of the Internet. In the rush to attract as many “eyeballs” as possible to their respective channels, stations, newspapers and websites, the focus of much of the media is now concentrated on the most popular stories rather than the most important stories.

It’s not always a bad thing to respond to public demand. The public interest in the Lac-Mégantic derailment and its aftermath has inspired plenty of excellent reporting (and some crappy work as well), but when infotainment events like the royal birth take up five minutes and more of national newscasts, the coverage of other issues suffers.

Because whether you’re talking TV, radio, print or even online, there is a finite limit to how much news can be aired, printed or posted. Editors and producers are forced to make choices about what to cut or skip so that we can be entertained with speculation about baby names or news reports on how merchants plan to tap into the $380-million royal baby business boom.

So, no, Mr. Monarchist, I’m not a cold-hearted baby-hater. I just think that our limited media resources should be concentrated on non-trivial issues that concretely affect the lives of Quebecers and Canadians. For people who need their daily dose of princely pablum, there are plenty of British websites — and the BBC —  to choose from.

So congratulations, William and Kate, on the birth of your child. And my best wishes to the parents of the 360,000 other children born the same day.

Now can we talk about the 29,000 children who died that same day, 70 per cent of them from preventable causes such as diarrhoea, malaria, neonatal infection, pneumonia, preterm delivery and lack of oxygen at birth?

The “good news” of the royal birth doesn’t change that harsh reality. And if the pageantry makes you feel better because it lets you forget the depressing reality of children not lucky enough to be born into royalty, then I would suggest that you, my friend, are the cold-hearted baby-hater. ■