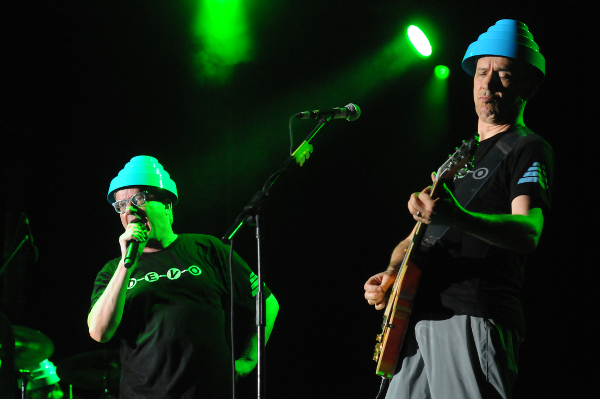 Devo. All photos by Cindy Lopez

History may say it was Arcade Fire and Eminem that put Montreal’s little summer festival that could on the map, but Osheaga’s seven-year history has never lacked in cool names, even back when the crowds were a little sparse. I’ve been to all of them besides the inaugural edition, always as a working scribe, and I remember most of them with relative clarity (don’t ask about Cypress Hill, though).

In terms of little moments, Pavement’s Stephen Malkmus getting pelted by a perfectly tossed beer cup (how did it not spill while in the air!?) probably takes the cake. Otherwise, here are some performances that still manage to stick out after seven years.

1. Iggy and the Stooges (2008): Not all old timers are equal, a fact made very clear the year Iggy Pop executed a modified version of the Léger-Boucher fitness test on stage, and rushing end-to-end with more energy than most high schoolers.

2. Girl Talk (2009): On the MEG stage at the same time as headliner Coldplay, the mash-up king cut and pasted every hit imaginable (okay, he did it in advance, unless he’s developed the ability to control his laptop with his mind while running around shirtless) into his hyperactive set while fireworks went off in the distance. And yes, he even played “Clocks.”

3. Devo (2010): An audiovisual delight befitting their reputations as music video pioneers. While Mothersbaugh and Casale talk-sang through their classics (and tracks from their terrific reunion album Something for Everybody), on the screen behind them were fornicating animated foodstuffs and bikini bottoms with faces. And hey, how many chances will you get to buy your own Devo helmet?

4. The Jon Spencer Blues Explosion (2010): My memories of this set are a little hazy at this point, but I do remember Spencer going way long (I ended up skipping Sonic Youth) and that his guitar squealed and fuzzed in ways I never thought possible. It was a big, beautiful, bluesy mess.

5. Death from Above 1979 (2011): To paraphrase what drummer Sebastian Grainger said during the group’s comeback performance (a long way from El Salon, to be sure): try doing something in your early 30s that you used to do in your early 20s. The duo looked no worse for wear, though, and gave a pulverizing performance on par with their salad days. Hell, later in the night Grainger was moshing with Fucked Up, so don’t be too worried about waning energy.

6. SBTRKT (2012): The big stages put butts on the island, but in recent years a lot of the festival’s most interesting stories have come from the electronic side-stages. Major Lazer’s turn on the sun-baked Piknic stage in 2010 was memorable, as were both smoky appearances by Crystal Castles, but last year’s merging of programming, deconstructed Drake samples and live drumming/vocals by SBTRKT would have been a lot for a full band to handle, let alone a multitasking duo.