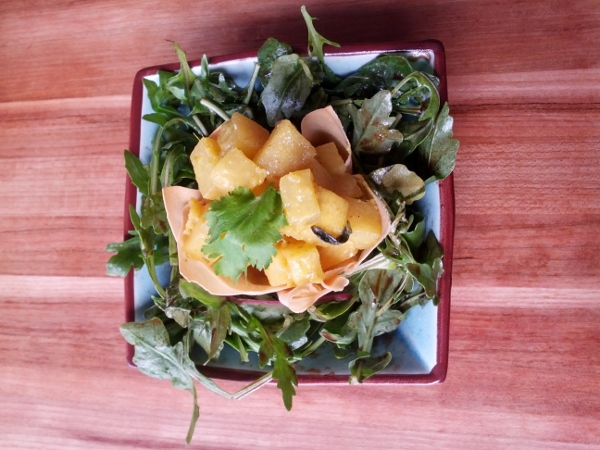 Spring flowers (or not)

Vegetarianism isn’t exactly popular right now. And veganism? Forget about it. Between the rise of foodie culture — a meeting place for trash- gourmets, macho fatties and food pornographers — and simply being in Quebec, where the influence of French cuisine and the pork and dairy industries (ie. mafia, in the latter case) made the province extremely late to the veg party, being an abstainer is kind of like being straight-edge or celibate. Like, what’s wrong with you? Life is short — eat a freakin’ sausage. and two glasses of milk is better, like the ad says. yeah, Mr. Lactancia, sure.

And yet there are vegetarians. That culinary proclivity is typically born of health concerns, with a little pro-animal, anti-factory-farming and carbon-footprint reduction- sentiment on the side. Then there are the PETA freaks, the kind of vegetarians who wring their hands over what other people eat — but hey, every group’s got its militants and maniacs. (I’m a Morrissey fan and all, but really, being subjected to animal torture videos during “Meat Is Murder” at his show in Burlington last October was not cool. And that song is honestly pretty lousy.)


I’m not even a strict vegetarian. I eat fish, seafood and gravy, and I’ll never give up cheese. But I can also do without it, so I ventured to Invitation V, which opened in March. For the omnivore POV, I brought my husband, the kind of guy who’ll always order the meat lover’s pizza but also ranks  Aux Vivres’s smoked-coconut BLT as the best sandwich in the city.

Unlike most of the established handful of veg eateries in Montreal, Invitation V is an upscale bistro that, along with its organic, fair-trade mandate, focuses on presentation. With the room’s neat, modern design and the care put into the aesthetic of each dish, it’s a place you could bring a snooty relative or a date to, as long as they’re not carnivorous hipster-haters (the succession of scenesters I spied through the open window on Bernard is a whole other piece).

There’s a lengthy wine list, which we perused with our usual what’s-cheapest-by-the-glass? criteria, but they were out of the mourvèdre ($7). We ordered the Mon Petit Pithon ($8) instead, and though the test sip went down smooth, the full glass revealed the wine to be just slightly corked. I’ve done it before, but in that moment I was too Canadian to send it back. (And not only did I finish my glass, I had most of my husband’s, too.)


We normally don’t do appetizers, but because we were playing food critics (I usually write about music), and my husband can never resist dumplings, we went for it. I opted for spring flowers ($6), and though my hopes for a floral starter were low, it wasn’t as delicate and perfumy as I’d imagined. It turned out to be a cup of something cubed and crunchy in a light Thai curry sauce, on a bed of balsamic-dressed greens. The waitress told me it was an obscure Japanese root vegetable, and this is only occurring to me now, but I kind of hope that its yellow glow was just turmeric. In any case, it was delicious, and I’m going to try and recreate it at home, with a Chinese pear.

The steamed dumplings ($16), four bad boys served in a bamboo basket, had such a satisfying salt and grease quotient that you didn’t need a dipping sauce, and that’s lucky, since they didn’t provide one. The unsealed pouch, held together with toothpicks, had a different consistency from that of a standard dumpling — I swear to God, it was like loose chicken skin, presumably minus most of the fat (and my husband, who’s eaten chicken a lot more recently than I have, will back me up on that). Inside were lightly stewed julienned carrots, cabbage and onions, much like what you’d find in a vegetarian egg roll or imperial roll. Winning.


But the mains weren’t quite as successful as the starters. The man opted for a burger and fries ($16), with lots of nayonnaise on the side (a white dipper with a consistency more yogurt than mayo), to which he added a few dashes of the herbed salt that sat at every table. The thick-cut fries were great, but the burger was big and a little unwieldy. The patty — made with seitan, a wheat-based meat substitute (they also offer tempeh, made with soy), and seasoned like falafel — had a firm but moist consistency that helped it achieve true toothsome-ness. He enjoyed it, but was not blown away by the burger bites of thick sandwich bread, crunchy lettuce, tomato and seitan. He also took issue with the fact that the patty came in four parts, making for an even messier experience than eating your average burger. I’ve consumed a wide range of unusual, oddly cut things that are shoved into a bun, doused in condiments and called a burger—there are varying degrees of success on the taste front, but I’ll invalidate any vegetarian-food criticism based solely on shape. (If you want correct shapes, try the creepy meat-alikes at Chu Chai. I so don’t get that.)
That said, I was impressed by the authentically Asian look of the hot pot ($17). At first glance, the simmering soup appeared to contain squid (a mushroom with tentacles), pork (potatoes) and egg-drop (soft tofu). There were also perfectly cooked pieces of asparagus, carrot, parsnip and green onion, in a curry broth that I paid an extra dollar for. Unfortunately the broth was part bitter and part nothing, without a trace of curry—maybe that was due to a miscommunication about my order. Even if it was the regular broth, it was dull, and the bitter taste and strange consistency of the odd, purplish potato chunks didn’t help. But it wasn’t a total loss. The waitress suggested that I add the accompanying side dish to the soup, so I unwrapped the banana leaf that sat on a small platter near the bowl to discover a soft bar of sticky rice topped with roasted coconut and peanut sauce—again, approximating the look of an Asian meal component (probably fish, in this case). I plopped a forkful into the soup, and sure, it helped. But it was too good to waste on kicking up the broth, so I devoured the rest on its own. So good, brah.

Then we shared a six-inch cheesecake, which masked its mystery dairy substitute with berries, berry sauce and a bottom layer of carrot cake. The “cheese” tasted okay on its own but lacked the fatty richness and flakiness of real cheesecake — its texture was more akin to custard. But who cares? It was a great package.


With only one major miss among the six dishes we sampled (really, one element of one dish), we’ll see the inside of Invitation V again, and soon. It’s nice to have a classy new vegetarian kid on the block. ■

Vegetarian-friendly: Obviously—  it’s vegan, with a number of gluten-free options, too