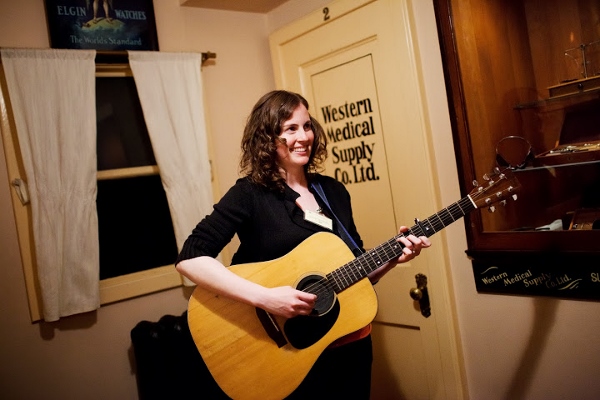 What would you do if a loved one only had a few years to live? The New Pornographers’ Kathryn Calder was faced with that question a few years ago, when her mother was diagnosed with ALS, commonly known as Lou Gehrig’s disease. Her answer was to become her mother’s full-time caretaker and record her first solo record, Are You My Mother?, in time for her to hear it.

There are few situations that could be as painful or personal, but Calder, in partnership with Montreal’s Yellow Bird Project, has made her story public in a very literal sense with a Kickstarter campaign for a documentary about her experiences. The film, A Matter of Time, will recount the musician’s struggle with her mother’s condition, the making of her solo record and her discovery that the New Pornographers’ Carl Newman was her biological uncle.

The Yellow Bird Project is an organization that sells shirts designed by indie artists to benefit charities of the artists’ choosing. They first collaborated together a few years ago when co-founders Matthew Stotland and Casey Cohen approached her about designing a T-shirt.

“It was during this time that she was going through this stuff with her mom,” says Stotland. “We thought it was an amazing story: setting a goal of recording an album and taking care of her mom and the twist of fate that got her into the New Pornographers in the first place.”

Calder says her previous experience working with Stotland and Cohen and the level of trust that formed between them played a big part in her decision to go ahead with the filming. “Ultimately the reason I agreed to do it was because I trusted Matt and Casey and the crew they had put together,” she says. “Trust is a huge issue with this kind of a project, and I trust them.”

That being said, it was still a difficult decision for the songwriter to allow people into such an emotional and intimate part of her life. “To be honest, I was hesitant at first. I wasn’t sure I wanted to relive the experience. I knew it would be emotional and difficult. But after a few days of thought, I realized that wasn’t a good enough reason not to do it.”

Though they initially wanted to finance the film with help from different grants and funds, Stotland says they quickly found that they didn’t meet the qualifications for most of them. “Canada is supposedly a great place for filmmakers, with all the available grants and the like. We tried our luck at getting all these different funding sources and weren’t really successful.” Kickstarter was a bit of a gamble, he says, but they were curious to try “this crowdsourcing thing” and see if it was a viable source of funding.

The campaign officially reached its target goal 11 days before the end date of July 22, but there’s still time to get in on the action and snag some cool goodies like a producer credit on the documentary, a Yellow Bird Project onesie or even a personalized collage by Calder herself.

Having backers pledge over the goal shows potential distributors that there’s a demand for the film, says Stotland, and the extra money will go towards things like improving animation sequences and getting proper sound work done. “The one thing we’ve learned is these things are really expensive. You don’t realize all these little costs involved, so we could definitely use another couple thousand dollars to make sure we’re able to get it done on time and properly.”

Calder (who’s since released a second critically acclaimed record, Bright and Vivid) hopes that the film can help educate people about ALS and raise awareness of the disease.  “It’s not a comfortable disease to talk about, but it’s such a devastating one,” she says. “I also hope that [the film] sends a message of support to those with the disease and their caregivers. It’s important to me that they know there are people out there fighting for them.” ■

There have been 132,461 known infections of COVID-19 in the city. Here’s how that number breaks down by borough.

It’s all mRNA, don’t be a vaccine queen.