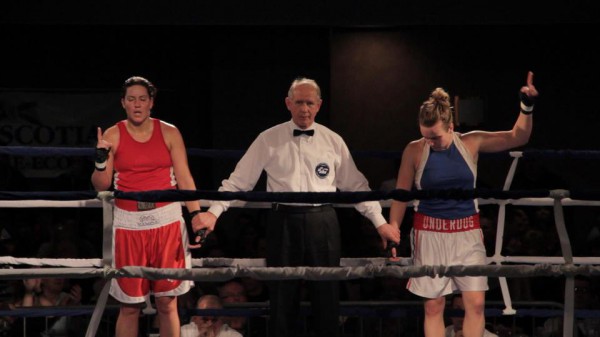 In 2009, it was announced that women’s boxing would finally be included at the 2012 Olympics. But there was one hitch — instead of the normal eight weight categories, female boxers would be limited to three: 51kg, 60kg, 75kg. This new regulation forced two World Champion boxers and friends, who normally fight in separate weight categories, to not only fight against each other, but to compete for the single spot available on the Canadian team in their now-shared weight category. Juliet Lammers and Lorraine Price’s documentary Last Woman Standing explores their fight for gold.

“The inclusion of women’s boxing in the Olympics was a bittersweet victory — it was great that women boxers would finally have the opportunity to go as far as male boxers in the world of sport,” says Lammers. “But the wrong had only been made partially right and it was an important detail to make clear.”

At the time of the announcement, Lammers was taking non-competitive boxing classes at Montreal’s Blue Cat Boxing, where co-director Lorraine Price was training as a competitive boxer. “At our coach’s birthday party in the spring of 2010, we started casually talking about how women’s boxing was going to be in the Olympics for the first time in 2012 and how it seemed like a historical moment worth documenting,” explains Price.

The pair didn’t have much digging to do in order to discover the story of Windsor, Ontario’s Mary Spencer and Lévis, Quebec’s (now Montreal-based) Ariane Fortin. For years, the pair had fought side by side on Canada’s team, winning national and international championships and becoming well known in the boxing community. “[Their story] was inherently dramatic and had a natural arc,” says Lammers. “It was a classic friendship-turned-rivalry story. Focusing on Ariane and Mary allowed us to explore the world of women’s boxing while telling a compelling story about two elite female athletes.”

The film explores Spencer and Fortin’s friendship and follows their journey as they prepare for challenges in both their personal lives and in the ring. “We always wrote with two scenarios in mind: scenario A, Mary won Nationals and went to the Olympics and won gold. And scenario B, Ariane won Nationals and went to the Olympics and won gold. We were certain that either could go to the Olympics and bring home the gold and we felt prepared for both scenarios. What was important and at times challenging was to maintain neutrality — we were asking to be privy to both sides of a rivalry and both sides needed to feel they could trust us,” says Lammers. “Victory for one meant defeat for the other, and by that point in the shoot we felt close enough to both fighters that we couldn’t help but feel torn by the outcome.”

Last Woman Standing is not solely a boxing film, as Lammers and Price managed to capture something almost tragic about the friendship. “They were always connected because they shared this common dream and because their ability to realize that dream was wrapped up in the other’s success and/or failure. Even after it was determined who would represent Canada, their lives continued to kind of speak to each other.There is a sad but beautiful symmetry to their experience and we weren’t really expecting to find that,” says Price. ■

Last Woman Standing will be screened at the Cinémathèque québécoise (335 de Maisonneuve E.) on Tuesday, July 9, 7 p.m. Ariane Fortin, Juliet Lammers and Lorraine Price will be in attendance.