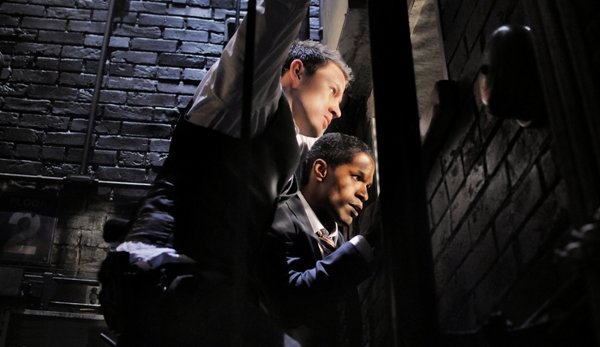 Channing Tatum and Jamie Foxx in White House Down

Does Montreal play itself ?: Unless I’ve been seriously misinformed for most of my life, the White House is in Washington, D.C. and not Montreal.

Notable local talent: The supporting cast is a veritable who’s who of local actors; nearly everyone brandishing a gun, reading the news or wearing a suit while dispensing non-critical information into a headset is from Montreal. Notables include stage regulars like Kyle Gatehouse (playing the small but pivotal role of the suicide bomber that sets off the film’s chaos) and Cat Lemieux (as one of the hostages), but it’s ex-pat Nicolas Wright (of Uncalled For fame) who really leaves the biggest impression as a dorky tour guide who gets caught up in the action.

Most egregious local landmark: It looks like all that was done here were interiors, as shots of the D.C. skyline are plentiful. There’s some really dodgy CGI here and there that suggests some location shooting may have happened, but an egregiously computer-generated shot of a flaming White House is anything but local.

It’s been a few years since we’ve had a good old blockbuster-off where two huge movies are released with ostensibly the same plot. While I have yet to see the critically lambasted Olympus has Fallen, I can’t imagine it being quite as satisfyingly preposterous as White House Down, the latest slam-bang effort from Hollywood’s favourite destroyer of picturesque landmarks: Roland Emmerich. He’s never been the subtlest of directors, but Emmerich really lays it all out here, crafting a 130-minute behemoth of relentless, over-the-top action that revels in its own stupidity with a refreshing amount of glee.

Channing Tatum plays John Cale (not, alas, the somber, viola playing founding member of the Velvet Underground — possibly the only thing that could make this movie even more satisfying on a primal level), a single father and former military man who has a thankless job guarding the Speaker of the House (Richard Jenkins). In an attempt to impress his politically obsessed tween daughter (Joey King), he arranges for her to come along to a lost-in-advance interview with Secret Service operative Maggie Gyllenhaal. Sticking around for a guided tour, the Cales soon find themselves at the heart of a (homegrown) terrorist plot that finds the White House in flames, most of its personnel dead, the President (Jamie Foxx) stranded, and the fate of the nation slowly crumbling. It’s up to two men to take on the terrorists, Die Hard-style.

While the elements are there to categorize White House Down as an umpteenth variation on John McTiernan’s classic, genre-defining film (Tatum even spends half the movie in a dirty white tanktop), little could prepare you for the lengths Emmerich and co. take to push the film into the realm of the truly excessive. With no less than half a dozen sneering, scenery-chewing villains (including Jason Clarke, Kevin Rankin, Jimmi Simpson, James Woods and a few twisty surprises), mind-blowingly ridiculous action scenes (one scene has Tatum and Foxx’s thinly-veiled Obama stand-in being chased around the White House lawn in a bullet-proof limo while Foxx hangs out the window firing a rocket launcher) and a script that raises the stakes so deliriously high it seems to have been written on a dare — White House Down is heir apparent to the Con Air school of delirious exuberance.

Even more surprising is that White House Down is the rare example of a left-leaning action movie. While I’d hesitate to call any action movie truly left-wing, one that has white supremacist bloggers and conspiracy wingnuts from the good old U. S. of A. as its bad guys and a controversial, peace-loving black president (not to mention a gratuitous Glenn Beck figure that is summarily dispatched), comes pretty damn close. It’s too goddamn cartoonish to pass for transcendent satire, but any movie that turns Obama into a machine-gun-wielding, Air Jordan-sporting badass wins points with me. ■