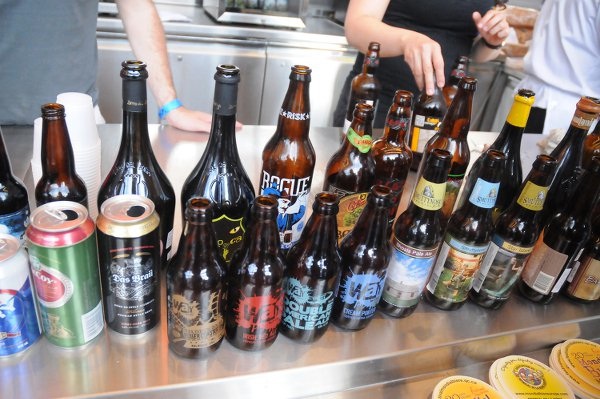 There’s a certain giddiness to a beer festival. Whether it’s the wild, varied selection of intricately brewed craft beer or the hedonism of pairing thick, creamy stouts with kangaroo sausages on a stick, it’s absolutely elating. But it’s also a pretty confusing scene to witness.

Le Festival Mondial de la Bière  is a cornerstone of Montreal culture, taking place in the sprawling labyrinth of the Palais de Congres and showcasing over 500 delicious brews by 120 different vendors from across the world, all available in deliciously sippable 4oz servings.

The hell with being a kid in a candy store, I’d rather be an overly intoxicated journalist shoveling in free aged cheddar and imperial stout at an industry booze ‘n schmooze fest any day.

Celebrating its 20th year, the festival is bigger, badder and, unfortunately, more “bro-lific” than ever. The air is thick with a barley-tinged, boisterous debauchery – quotes like “These people don’t even know what douchiness is yet!” set the mood, along with another gem over by the gimmicky breathalizer booth: “Woah! I’m blowing a 0.28 bro!”

Tasting coupons are $1 a piece, and tastings range from 2 coupons for 4oz of generic corn-brewed sludge like Molson Wheat to 5 or 6 for a 4oz glass of cask aged barley wine. If you actually like beer, you’re looking at 3-4 coupons per tasting. If you shill out the money for a VIP pass, you get access to the VIP lounge and terrace, where you can sample – practically without limit – the top-of-the-line beers of the festival, along with an assortment of high-class hors d’oeuvres.

So how do hoards of bros with Jagermeister hats and tanktops, feeling phantom limb syndrome at the loss of a beer bong get this drunk off of 4oz tasting glasses you may wonder?

Well, I have a theory.

If you’re used to sucking down the watered down 4% barely-beer they serve at Sports Station all day, when you start knocking back 9% IPAs and 12% barley wines – you know, actual beer – it’s going to knock you on your ass. You end up being that guy who’s so wasted at a beer festival that he can’t even ask for what beer he wants next, instead just holding up a bottle, grunting and pointing like a drunken Neanderthal.

Like St. Patrick’s Day and Canada Day, the beer festival weekend is a slimy, writhing crowd of yelling idiots who’ve wandered out of an 80s frat party movie and think that plastic horns and chants are still cool – and everyone lets it slide, because these are the people that keep the industry going. That’s why, even when you can’t speak, someone is going to let you pay $5 in coupons to taste 4oz of their beer. Because, let’s face it, when the hell else are they going to be able to do this?

It’s a shame that everyone’s too drunk to remember what they’re tasting, too, because this year’s festival played host to some of the most complex and intricate beers in the world.

One of the most surprising showings this year was the craft beer offerings from Brazil. A relatively new player in the microbrew market, Brazil is silently creeping up behind the North American brewers with IPAs that’ll put almost anything from the East Coast to shame and Doppelbocks that would make a Belgian blush. Drinking a 9.2% imperial IPA from Cerevejaria Colorado, I’m floored at how it’s triple hopped, spicy and intense, but finishes as smooth as silk.

Elsewhere, Italy makes up for its flaccid, uninspired wines by delivering one of the best high-proof barley wines of the festival, while big time US players like Dogfish Head and Rogue Ales, as per usual, arrive with their “A” game and sell out almost instantly.

Despite the over-marketed, loud and garish booths from major label macrobrews like Keiths, Rickards and Molson, there are actually a ton of really great microbreweries vying for your attention, peddling everything from smoked porters to raspberry and chocolate stouts. You can get the big name swill anywhere, so why would you come to an international beer festival to pay a premium for it?

Stands like the egregious “Canadian Club and ginger-ale in a can” booth have lineups backed up into the main hall, meanwhile, there’s little to no love for small-time players like La Succursale, based in Rosemount, who are offering beautiful beverages brewed with the finest citra hops.

It’s kind of depressing when the majority of people are clamoring for vague “malt beverages” masquerading as mixed drinks, served by scantily clad CEGEP students, but unfortunately, it’s the kickbacks from these liquor and beer giants that keep this festival running.

When it all comes down to it, the festival is a harsh dichotomy of frat-party processions and big-time beer aficionados.

If you’re the former, why not just stay home and shotgun a 12 pack of Coors Lite? It’s cheaper, and you’ll get the same end result.

If you’re the latter, I’d recommend spending the money on a VIP pass and imbibing all of the gold medal winning beer and artisanal cheese you can muster. ■