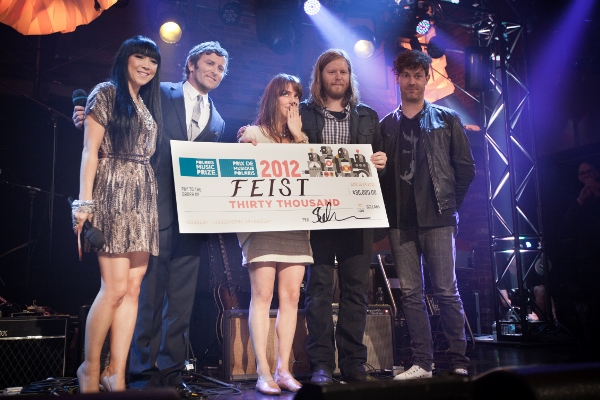 If you’re a Canadian music geek, the Polaris Music Prize is like group therapy.

Now in its eighth year, the award where a jury made up of Canada’s esteemed music journalists (219 this year, including yours truly and Cult MTL editor-in-chief Lorraine Carpenter) pick one album from this great land to stand above them all, regardless of sales or label support, has never failed to rile music fans with its picks.

This year, Montrealers will have the opportunity to grimace or cheer in-person at the PHI Centre, where Polaris will be unveiling its long list of 40 albums selected by the jury. I recently had the opportunity to chat with the award’s founder, Steve Jordan, about keeping Polaris stable in a constantly changing music biz, as well as Feist’s win last year, which still bugs me.

Erik Leijon: You’re in Banff right now, getting ready to host a Salon (i.e. a live Polaris discussion). Has it been difficult to grow Polaris outside of Canada’s big cities?

Steve Jordan: Like it would be for anyone trying to do something with a national scope. It’s a challenge just to make sure the major cities are all included and are embracing what you do, but I think we’ve had some success.

EL: Has making inroads in Quebec been tough?

SJ: All we can do is translate everything we do and try to be as bilingual as possible. Of course we have to make sure we have jury members who are embracing their local Quebec culture and bringing it to the rest of the jury, which I think we’ve managed to successfully do. Certainly you don’t see the result of that organically until a French-language band wins your award (Karkwa became the first francophone band to win the award in 2010). I think until that happened we had more of a struggle being accepted or taken seriously outside of anglo Montreal. It’s no secret we’ve had a large number of Montreal and Quebec nominees since we’ve started,”“Hopefully with the long list nominations there will be some great hometown stories on there.

EL: Times are tough for music media these days. Has that had an effect on Polaris?

SJ: We haven’t seen it in a marked way, but every year we have more and more jurors listing freelance as their affiliation. It’s something we’ll have to monitor as it evolves. As it does so will the make-up of our jury change.

EL: What about the album itself? Is it still the best format for celebrating music?

SJ: People have been talking about the death of the album for a long time, and it’s a little premature, although obviously its fade into obscurity is identifiable. When it comes to the album, our basic view is we recognize there are other forms of music and we’ll look at what constitutes an album as time goes on, but as long as artists are still making them, that’s what we’re going to honour.

SJ: I’ll say it was as controversial as every winner we’ve ever chosen. There’s always controversy surrounding our choices and that’s awesome. You don’t want people to say they called it. That’s not what Polaris does — it creates chatter around its winners. I’m not entirely sure what the controversy was about, other than people thought someone else should have won.

EL: The controversy was that Feist seemingly didn’t need the money or another award, and that it should have gone to an up-and-coming artist.

SJ: Respectfully, they’re missing the point of Polaris. And how have we not supported up-and-coming artists, exactly? We’ve never said the Polaris has been about giving somebody an infusion of cash. We’re modelled after fiction awards and arts prizes, who award people for doing something excellent. I understand the emotion of someone saying Arcade Fire or Feist don’t need the money — and that assumes we’ve seen their bank accounts, which is a little weird and very Canadian — but also the money is a way to get people to pay attention to the record at hand. I don’t think that argument happens when Michael Ondaatje wins the Giller Prize.

EL: What are the immediate goals with Polaris these days?

SJ: To just stick around, that’s our M.O. — to get enough money to do it again. Our efforts internationally are to reach people who are into music, like music fans here in Canada. Back to the controversy of picking a winner — we like that because it means people give a shit. If they care about who’s going to win, they’re going to look at the shortlist, listen and compare the albums. We’re about the whole conversation, and that’s what we’re trying to export. ■