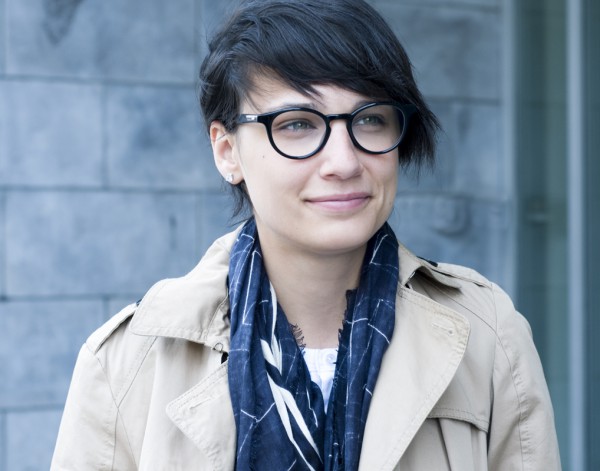 At 25, Chloé Robichaud has five short films on her resumé, three of which were shown at Cannes in 2010, 2011 and 2012, notably Moi non plus, Nature morte, and Chef de meute. Her first feature film, Sarah préfère la course, didn’t go unnoticed by the Cannes committee either and was featured in the festival’s 2013 Un Certain Regard section, which included Sophia Coppola’s The Bling Ring, Ryan Coogler’s Fruitvale Station, Claire Denis’ Salauds, as well as many others.

The experience of being at the festival was extremely humbling for Robichaud, and even though she had attended Cannes before, being there with a project that was three years in the making was very exciting. “I sat a few rows from Nicole Kidman, whom I love from The Hours, and I caught up with Lynne Ramsay, whose Ratcatcher is one of my favourite films,” she says of some of her more overwhelming personal moments.

Sarah préfère la course focuses on Sarah (Sophie Desmarais, who also starred in Robichaud’s short Moi non plus), a young girl who disobeys her mother and moves to Montreal in order to join McGill University’s running team. She also marries her roommate Antoine (Jean-Sebastien Courchesne) for the additional financial benefits. Sarah is a quiet, mousy character, whose sole purpose in life is to beat her own running time. She is rather awkward, even antisocial, and her passion for running could be understood as both a kind of escape from her traditional obligations and expectations (marriage and starting a family), as well as a form of search — one which she would rather do alone than be accompanied by the baggage of family and friends who only slow her down.

“I think it’s interesting to see a female character that is so focused on what she wants to do. There are no clichés about femininity in Sarah, and that’s what I like about her,” explains Robichaud. In the film, when one of her friends asks her what she would do if she couldn’t run, Sarah states that running is the only thing she can control. “Nothing else has the same effect on me,” she says.

Robichaud explains that the theme of control in Sarah préfère la course is strongly related to the theme of free will, and even though midway through the film Sarah’s heart literally skips a beat, forcing her to slow down, she doesn’t. “She’s going to run, that’s the choice that she is going to make, despite her body trying to tell her otherwise,” says Robichaud. Even though Sarah is often dubbed boring by her roommate Antoine (“You’re not even particularly funny, but I love you”), we see that her character grows and changes from the beginning of the film to the end. Her run takes her somewhere different than where she was at the beginning.

The film’s cinematography is tableau-esque, with people moving swiftly into frames and then smoothly leaving them. The running sequences add a sense of poetry, emphasizing the point that it is not a sports film but rather the story of a girl who likes to run. The film’s photography is perhaps reflective of Sarah’s one-track mind, which has a linear direction forward—not to win a medal, just for the purpose of continuously moving forward. People come in and out of her life, but she stays focused on the same goal.

The cast trained for nearly six months prior to shooting, and the film itself took about 23 days to shoot. Having started writing the screenplay while she was still in university, Robichaud says that Sarah préfère la course is a part of her that she is finally letting go. She is already writing her next feature film, entitled Country, which will focus on three women in politics who meet at the heat of a political conflict. “It wasn’t a conscious choice, but I think it’s important to show strong female characters. I’m not doing propaganda… but it’s my interest right now.” ■