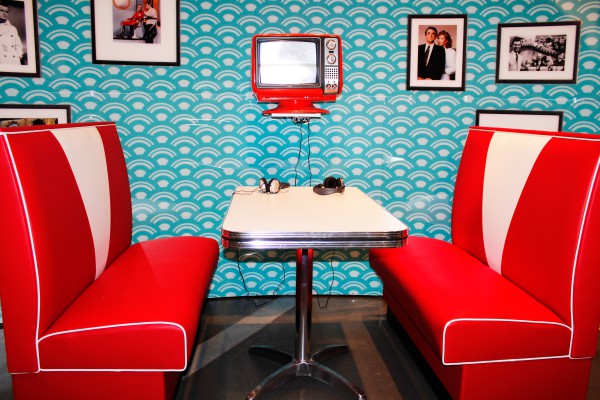 Aspects of the Global Village – The Television Era in Canada, 1950–2000. Photo by Cinémathèque québécoise.

The Cinémathèque québécoise’s new exhibition, Aspects of the Global Village – The Television Era in Canada, 1950–2000, features TV sets from the Moses Znaimer collection, showcasing not only the evolution of household entertainment from big, heavy TV sets to small portable ones, but some pre-TV technology.

“Before TV actually came about, numerous attempts were undertaken to conquer the domestic entertainment market with such apparatuses as the Kodascope Library in 1930 — a piece of furniture that Kodak destined to the living rooms of families who wanted to watch movies,” explains head curator Jean Gagnon. The Panoram Soundies in 1939 in the USA, that was a jukebox with film, as was the Scopitone from 1959. Eventually, TV won that domestic market. So, the public will see surprising things that younger people may not even suspect.”

The exhibition, in collaboration with the CBC, also takes on the task of exploring and highlighting 50 years of Canadian TV programming. “Canadian television is very hard to characterize, our country being so vast and so diverse. One thing though that was noticeable when we selected excerpts from TV programs was how humour is present,” says Gagnon.

“In English Canada, Wayne and Shuster,  CODCO and later This hour has 22 Minutes are good examples. In French Canada and Quebec in particular, Rock et Belles Oreilles represents the trend, with predecessors like Jacques Normand and Roger Baulu in a program from the ’60s called Les Couche-tards. Also we should not underestimate the importance of first nations television in Canada, beginning with Inuit Broadcasting Corporation that started in the late ’70s and early ’80s.”

Although at times Canadians dabble in the “What it means to be Canadian?” crisis, sifting through these excerpts and exploring these archives allows for common ideas and themes to appear. But our contribution to television is not limited to programming. Canada has apparently also been at the forefront of technological advancements in this area.

“Canada, given its land mass, is the first country to be fully cabled and to use satellite transmissions for television coverage of the territory. This important technological development also triggered such thinkers as Marshall McLuhan,” says Gagnon.

“One thing we wanted to stress in our exhibition is that, in Canada, the use of video technology by citizens, activists, as well as artists, has been very important from the ’60s on. This tool of video, so familiar to us now, was very novel back then, and it was often used to criticize TV and to allow for alternative ways of documenting events and providing information. This led to very early experiments with cable TV — television by citizens. And Canada has been very innovative also in developing new means of delivery and interaction with television. For instance, Videoway, a technology developed by Videotron, was the first on demand television system implemented in North America in the early to mid ’90s.” ■