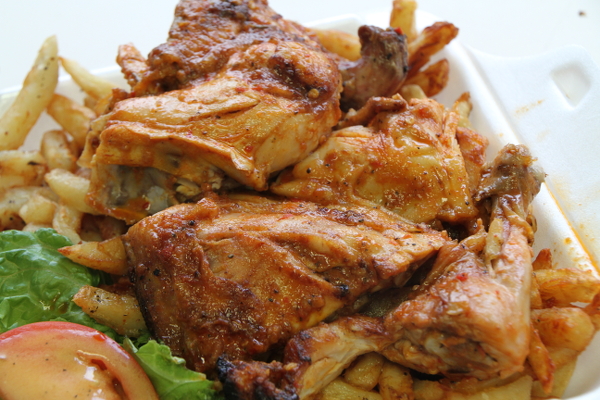 It isn’t easy to explain Romados to someone who hasn’t tried it. Tourists, vegetarians, ignorant rotisserie loyalists — they won’t believe you when you tell them that a nondescript Portuguese grilled chicken joint and bakery on the corner of Rachel and de Bullion is as essential to the city as Schwartz’s.

But Romados is special. Its alchemical sauce-slathered chicken, piquant fries and ridiculous portions for under $10 more than warrant the line-ups that were a constant until January 5, 2013. That’s when a small electrical fire broke out in the basement of the restaurant. As the news spread feverishly over social media, Manny Machado, Romados’s operations manager (and son of owner Fernando), took to Facebook and Twitter to assure alarmed — and hungry — Montrealers that the fire was minor and that Romados would be slinging chicken and natas again soon.

An insurance inspection found that smoke had seeped through the restaurant’s walls and into the apartments upstairs. “Toxic smoke is worse than any other kind of fire damage,” says Machado. “We had to gut the entire restaurant.”

As Romados navigated a maze of insurance bureaucracy and contended with the whims of construction workers, customers got desperate. They vented their frustrations by scrawling notes on the restaurant’s door and in testy Facebook posts. Machado responded on Romados’ page with optimistic promises and a reminder that messages like “Fuck you. We want chicken!” weren’t exactly speeding things along.

But now there is an end in sight. The family recently started serving customers at its St-Michel wholesale bakery, and Machado says they are hoping to reopen the Rachel location by St-Jean Baptiste Day  [Ed. note: Romados will reopen on Friday, July 5]. Window installation is the last remaining obstacle. “The day they are in, we open,” he says.

So what changes can we expect from the revamped Romados? Machado, who is also an interior designer, is taking the opportunity to give his family’s restaurant a facelift. He promises that its functionality and food will return unaltered but says the layout and decor will be different, with one benefit being more seating.

Another thing we can expect: those line-ups. Despite being closed for the entirety of the voting period, Romados ranked No. 1 for Best BBQ Chicken and Best Portuguese in the Best of MTL. Which begs the question: Will Romados ever franchise its chicken?

Machado would only answer cryptically.

“The demand definitely exists, and we’d like to make our products as accessible as possible to the very hungry citizens of Montreal and beyond.” ■