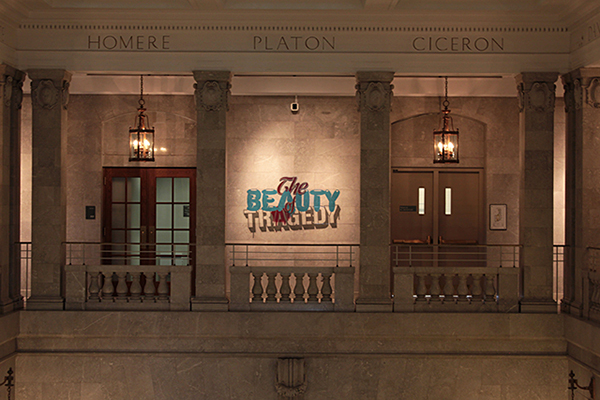 “For me it’s very interesting to see how from a tragic beginning, something beautiful can come out of it. It’s a very hopeful way to see things,” says Alan Ganev, curator of the monthlong Beauty of Tragedy exhibition. The show, which features work by Omen, Labrona, Jason Botkin, Peter Ferguson, Scaner, Wia and Ganev himself, closes this weekend with a big finissage party in the swishy Conseil des Arts de Montréal space.

Ganev says he was inspired by Richard Mosse’s documentary The Enclave, which uses CIA infrared combat technology to film the crew’s infiltration of Congolese rebels, as well as by Leah Gordon’s recent Kanavale exhibition at the PHI Centre.

“I just found it fascinating how for example a community like Haiti can come together and create this spectacle based on political corruption and slavery,” he says.

He approached the seven participating artists to engage with this theme, and each brings their own take. Ganev says he finds this subject particularly apt in the case of low-brow art, which draws from comics, graphic illustration and graffiti practices in its conception and craftsmanship. He notes the parallel between the emergence of street art in the 70s, when nascent hip hop and graffiti cultures sprung up in response to the bombed-out concentrated poverty of big inner cities. Low-brow artists like those featured in Beauty of Tragedy, he explains, are similarly forced into creativity by a refusal to conform to the tacit regulation of urban space.

“In the 70s, sectors of society were neglected by the government, and there was a lack of public funds,” he explains. “They went out in the street just to tag walls, because finally they just wanted to express themselves. And they started to develop a passion, and from that, just a regular tag, it developed as they developed an interest for, let’s say, composition and colour and developing your own identity through the medium. And this starts unfolding, to the point that it inspires other sorts of movements.”

Beauty of Tragedy, he explains, tries to show “what comes after graffiti,” when craftsmanship and self-expression become primary.

“It’s very refined, but everything starts from that tag that everyone hates, that you put on public walls and benches,” he says. “It’s something that comes from this rage or this willingness to rebel against society, that develops into the passion of an individual willing to just bring something new to the table.” ■

The Beauty of Tragedy is on through June 16 at Conseils des Arts de Montréal (1210 Sherbrooke E.). Finissage and closing party for the MURAL street festival June 16, 8 p.m., free