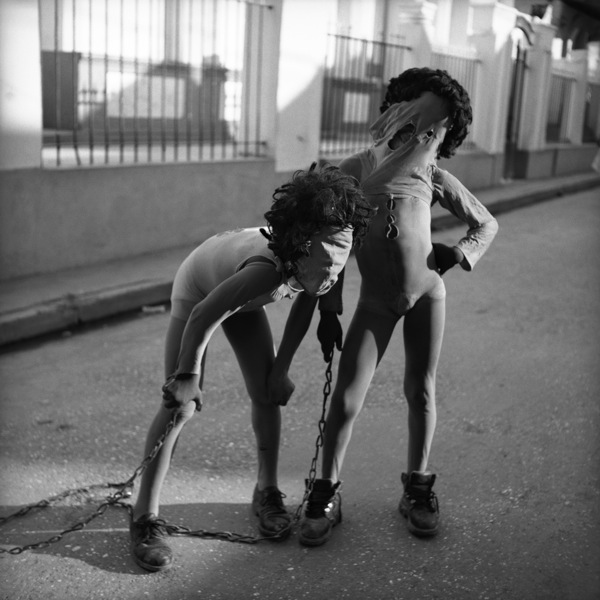 UK photographer, artist, author, musician and curator Leah Gordon’s work is celebrated internationally. With sensitivity and incisiveness, her photos of Haiti’s people capture the fascinating offspring of a marriage of centuries-old colonialism and folk traditions. The exhibition Kanaval, currently at the Phi Centre, looks at participants in the pre-Lenten Mardi Gras Festivities in the Haitian coastal town of Jacmel over a period of 16 years.

These haunting photos covering a cross-selection of the population are not just arresting for their macabre ambiance, but also for their ability to forge a rich identity for the costumed and masked subjects. Alongside are oral histories that match with each costume, though not necessarily the specific performer. Together, they cast a potent charm on the viewer that is both moving and inspiring.

Gordon took the time to talk to Cult MTL about her exhibition.

What led you to take an interest in the tradition of Kanaval?

I was deeply drawn to the costumes and intrigued as to the narratives behind this surreal street theatre. Jacmel carnival is intense, but what I like about it is it’s so cheap. Whilst Hollywood squanders millions on CGI and 3D effects to frighten the world, Jacmel Kanaval does it far more eloquently with papier maché, pot black and cardboard or nylon stocking face masks. If you think of the revolutionary past and the slaves’ uprising, they probably had be to pretty efficient at looking scary on a low budget as they were taking on the might and armies of Napoleonic France with few weapons or horses.

The characters and costume partially betray their roots in medieval European carnival, but the Jacmellien masquerades are also a fusion of Vodou mythology, ancestral memory, political satire and personal revelation.

What is the most significant of the photos for you?

I guess the original Lanse Kod that I took on my second visit in 1996 is the most iconic, but also the one that in a way generated the structure of the project and the book. I started this project in 1995 and kept returning for seven or so years. It became rapidly apparent to me that there were many underlying narratives. I realized by making photographic images, I was creating my own spectacles, stripping back the history and narrative.

Also, as a photographer I have always been keenly aware of the difficulties and responsibilities in representing Haiti. Since the slaves’ revolt, Haiti has been a mythological epicentre for racist and colonial anxieties. Many of these encoded mythologies are reproduced and replicated through the visual representation of Haiti. Looking at my increasingly iconic photograph of the Lanse Kod (rope throwers), the two men with the bulls’ horns, I was aware of how easily the wildly exotic image could reinforce stereotype. The issues of “who can represent who, and how” are significant issues of power, race and class. 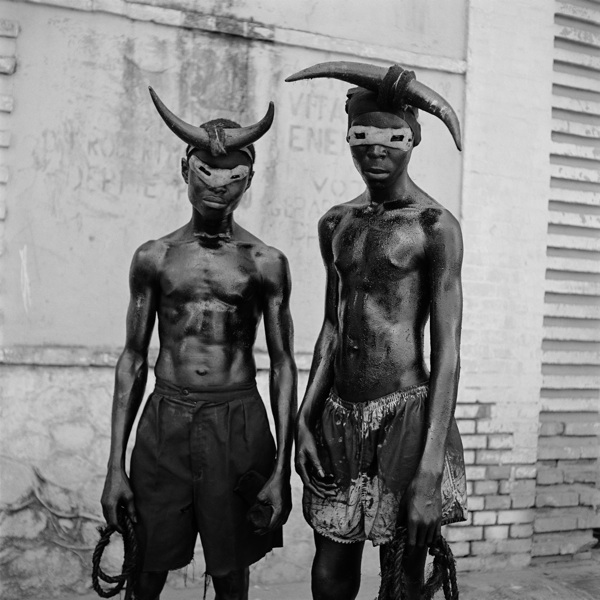 How did you come to collect the oral histories?

While I could not eradicate all of the power imbalance inherent in my position representing people in Haiti, or overturn the 200-year cultural demonization of Haiti, I could at least find strategies for “damage limitation.” So after seven years of photographic documentation, I realized that the images were not enough; I needed the signified alongside the signifier. So I returned three times to Jacmel in a calmer, more tranquil, non-carnival period and collected the oral histories of the people making and wearing the costumes. I wanted the stories behind the masquerade. I tracked down the leaders of the carnival groups and asked them to tell me their tales, as a way to restore the narrative to the photographs and try to reduce the level of spectacle.

Any thoughts on having your works exhibited in Montreal as part of the fundraising efforts of Kanpe?

If all goes well I’ll be coming over to be in a panel discussion with Michaelle Jean, who comes from Jacmel, in April, and I hope that Kanpe will also have a representative on the panel to help them publicize their great work. I visited one of the villages where Kanpe works and they appear to be making an incredible difference. I also took one of my all-time favourite photographs of a local woman in the village!

Do you have any parting thoughts?

Leah Gordon’s Kanaval is on exhibition as part of a fundraising initiative for Haitian relief organization Fondation Kanpe at the Phi Centre (407 Rue Saint Pierre) from Feb 25 – April 27, 2013. Free.