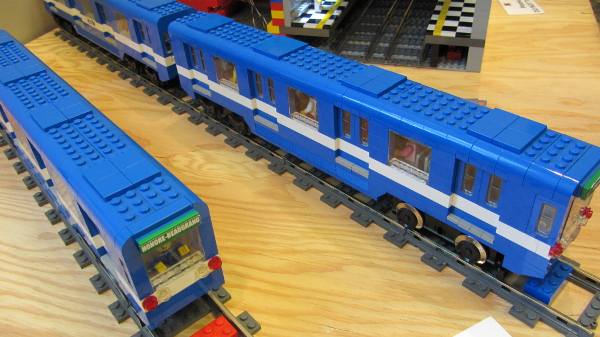 At the rate we’re going, this Lego metro will one day outpace the real metro. Photo via Flickr

Here’s some heartening news: Expect more metro breakdowns. For six months, anyway. That’s apparently how long it will take to work out the software and hardware issues that led to recent shutdowns. Then it should be smooth sailing — or at least, per the STM, “the worst will be behind us.”

So Team Denis Coderre, the municipal party with the super-inspired name, is growing. Pointe aux Trembles/Rivière des Prairies mayor Chantal Rouleau is now on board, as are two area councillors. What will happen in November is still anyone’s guess, but we hope that, if Coderre and co. are asked how their party came together, they nod to the Wu-Tang Clan and say, “like Voltron.”

Mandatory Rob Ford update: Despite wild turns — like, for instance, a possible link to a killing — Canada’s own crack-smoking mayor (shouts to Marion Barry) is not stepping aside. No, despite a dwindling staff, he’ll soldier onward, while Gawker, which raised $200,000 to buy the video whose location some say Ford admitted he knows, tries to arrange the purchase from the drug crew with which they lost contact. But hey, “things are doing great.”

In a startling turn of events, the Charbonneau Commission has learned that, yes, pretty much every councillor in Laval was part of the collusion. And if they didn’t know how the system worked, they learned really quickly. That even goes for the city’s current mayor, Alexandre Duplessis. And though the cash the Parti PRO des Lavallois collected went toward political interests, some of it even covered councillors’ post-vacation cell phone bills.

And, finally, we salute Henry Morgentaler, the abortion pioneer, who died this week at 90. ■