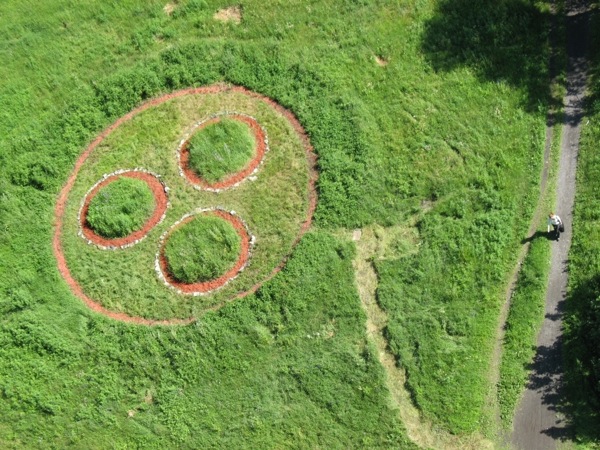 Bees are social gardeners. Collecting pollen from petal to petal, flying alongside other bees, they sprout flowers in their wake, signs that say: “I’ve been here.”

The way ecological instructor and visual artist Emily Rose Michaud sees things, humans and bees aren’t so different. As members of the city’s urban nest, we too can change our environment through our actions and knowledge. In lieu of leaving a trail of flowers in our wake, we disseminate information through the written word, like Michaud’s grassroots gardening zine Sprout Out Loud!, which launches its second issue at the Drawn & Quarterly store this Wednesday.

“Practically, this project is about digging into the city and creating beauty. Symbolically, it spreads the idea of investing in your neighbourhood, which can trickle into more civic involvement,” Michaud says. “I think of people as acting like bees, because there’s no limit to how far pollination can spread.”

“Guerrilla gardening aims to stimulate hope, because people feel so squashed politically,” Michaud says. “It’s a complement to other forms of protest. It’s political without being overtly about politics.”

According to Michaud, guerrilla gardening projects don’t just nourish bucolic and political landscapes but can set the whole city abloom by increasing property values and weaving generations together. “Green spaces bring a lot of hope. I took a visit to Philadelphia a month ago, and there are some very run-down areas. One project in particular, the Garden of Arts and Humanities, had a really positive effect on the community that gathered around it. It brought beauty to an area where there wasn’t a lot of hope.”

Montreal has land art of its own, too. Since 2007, Michaud and Sprout Out Loud! volunteers have maintained the Roerich Garden, a land art project in the Maguire Meadow, one of the Plateau’s last undeveloped green spaces.

From a bird’s eye view, the grass forms the three-circled design that designated cultural areas to be spared bombings during the Second World War. Now that the meadow has been re-zoned from an industrial to a park space, the group hopes to work with the City and avoid the monoculture that characterizes many Montreal parks. But as with any artistic collaboration, it isn’t easy.

“I’m trying to discuss how people sensitively transform these public spaces,” Michaud says. “Land art is a creative relationship with the environment, an impermanent art form. It’s accessible, and everyone can react to the space. But because it involves people, it has a social edge.”

If Montreal’s community gardens are bastions of guerrilla gardening, and its tucked away gem gardens are its land art, consider Sprout Out Loud!’s newest issue the map of the terrain. It features contributions ranging from recipes for seed bombs, texts on guerrilla gardening and land art to artwork that mediates Montreal’s urban and organic elements. Standouts include a series of poems on Montreal’s tree families and a project called “Ephemeral Cartography,” which maps out the variety of plants growing in the city.

Sprout Out Loud! has also taken root outside Montreal, with artists and green thumbs from Toronto and Philadelphia eager to contribute. Perhaps it’s a sign that the spirit of a positive, life-affirming sense of revolution has begun to bear fruit.

“This is the project that really led me to explore the idea of art in a living sense. I think that’s what my process is ultimately about, bringing living things together, whether it’s bringing people closer to each other, to their environment, or introducing plants to a new environment, it’s always about creating links, like a living tapestry,” Michaud explains. “And that’s what’s close to my heart. Nothing in our life can exists without what the environments around us give us. We have to remember that, and stimulate that relationship every day.” ■