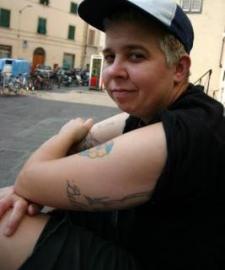 Ali Liebegott is a poet, and novelist based in San Diego. Her second novel, Cha-Ching!, is the tender and unflinching portrait of Theo, a messed-up butch dyke in her late twenties who moves across country in the hopes of  leaving her bad habits behind. Fleeing to New York from San Francisco, Theo slowly changes her life for the better with a few major bumps along the way. As she gradually opens herself up to the possibilities of love and healing, she must come to terms with her troubled relationship to alcohol and gambling. Despite dealing with heavy topics, this novel is smart and big-hearted, and Theo is an endearing protagonist who always tries to do the right thing.

After driving across country with a pit bull named Cary Grant, Theo settles in Yonkers on the northern edge of NYC because she can’t find her way into the city through the tangled masses of highway. Theo manages to find a series of jobs and stay sober, but faces the crushing loneliness of being gay in the suburbs. The narrator notes that “When she left San Francisco Theo had thought she didn’t care if she ever saw the gay pride flag again,” but Theo is disappointed that “the gay people in Yonkers seemed to lack not just gay pride, but gay ambition.” Eventually she flees to Brooklyn after reconnecting with an old friend and begins to stake out a community she can call her own.

Liebegott’s delicate depiction of Theo’s butch identity is one of the highlights of the book as Theo often encounters confusion and even harassment from straight society. During her drive across country Theo awkwardly navigates the restrooms of Middle America, feeling out of place even when she wears the long ‘Butch Bathroom Wig’ that she uses as femme camouflage. Even in San Francisco Theo’s gender identity often confused people, and she has come to imagine herself as a wild creature known as “the sirma’amsir,” as a result of how strangers often address her. Liebegott’s unassuming brilliance as a writer is on display on the several occasions when Theo imagines herself as this creature, “some kind of elusive two-towed sloth that lazed about the rainforest floor… drinking Coca-Cola and chain-smoking.”

Despite only being able to find shitty jobs and terrible apartments Theo falls in love with her new city. But her life starts to fall apart in a big way when, after winning a bundle on a longshot at off-track betting, she begins contemplating earning her living as a professional gambler. Liebegott’s depiction of Theo’s descent into gambling addiction is harrowing. Cha-Ching! digs deep into the reptile psychology that compels Theo to regularly drive to Atlantic City, pump hundred dollar bills into slot machines and accept free drinks from casino staff. Liebegott observes that “Gambling is not about getting money; it’s about shoving adrenaline into the brain receptor that eats it up like birthday cake.” At the same time, Theo’s attraction to winning double or triple a week’s wages in only a few hours at the casino is palpable. Although she struggles with gambling to the very end, the novel suggests that with the love of Carry Grant and a new girlfriend, Theo will be able to overcome her compulsion.

Cha-Ching! is a rare novel, a smart page-turner which honestly delves deep into the screwed-up heart of one young working-class dyke. At a moment when novels about social outcasts and the downwardly mobile are rarely published, Liebegott has hit a home run with this tender, funny, and moving book, which examines the profound difficulties of being young and gay, and carving out a new home in an indifferent world. ■