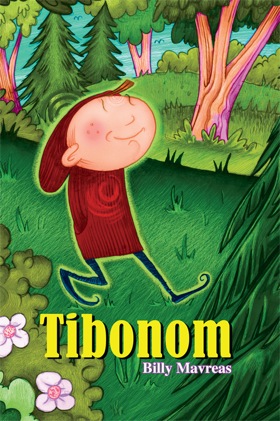 Tibonom, the new book by Montreal multidisciplinary artist and local gallery/boutique Monastiraki proprietor Billy Mavreas, is a refreshing examination of just how much can be said without using words. The protagonist in this collection of wordless comic strips is a modern day spiritual seeker who spends time meditating, concocting magical potions in his cauldron and having adventures with his adorable headless cat. Tibonom, originally known as Boypriest when these comics were being serialized in yoga magazine Ascent, is an innocent in a world that can be both difficult and yet full of joy. The depictions of his wanderings through the urban landscape, his occasional confusion and his abiding love for the world around him make this book a charming and enjoyable read.

I chatted with self-described “conceptual outsider artist” Mavreas earlier this week while he sorted through his 20-year archive of mail art in preparation for his next book, a collection of poetry. He had just returned from launching Tibonom at the Toronto Comic Arts Festival, which he described as “a vast room filled with beautiful books” and old friends, albeit slightly daunting.

“Your book is just like a business card that you throw onto the fire because there are so many other new books in the place,” he says. Still, the launch was a success and allowed him the opportunity to re-connect with a passionate community of Canadian and international cartoonists and publishers.

Mavreas jokingly identifies himself as part of an “old guard” of Montreal cartoonists, noting that there are now so many illustrators working in the city, in so many diverse genres and styles, that, unlike in the past, they don’t necessarily all interact. He sees this explosion of comics as positive, but also recalls a time when the comics scene in Montreal was “totally blendered,” including more collaboration of anglophone and francophone artists. Mavreas himself has a long-standing connection to Montreal’s francophone comic scene, first becoming involved in the 1990s after his posters for spoken-word poetry events such as YAWP! started getting noticed by young Quebecois cartoonists.

Carrying on this tradition, Tibonom is published by a francophone press, the Montreal and Outaouais-based Éditions Trip, who will also be launching new titles by Carlos Santos and Frédéric Cordier alongside Tibonom at le Cheval Blanc on Saturday afternoon. Although Éditions Trip is a new imprint, one of its founders, Marc Tessier, has a long history of participation in the city’s vibrant comic scene, both as an artist of titles such as Mac Tin Tac and The Theatre of Cruelty and as one of the editors of the seminal anthology Cyclops.

That Mavreas is a poet in addition to a visual artist makes his choice not to use words in this new volume all the more intriguing. When asked about this he laughed and replied, “I just don’t know how to make pictures fit with words. I don’t know how to make them work together,” gesticulating as he described the difficulties of finding a place for text on an illustrated page. But his comics certainly don’t suffer as a result of this dilemma. Mavreas’s style throughout the book is delicate, using light pencil shading rather than heavily inked lines, and the effect is inviting and suggestive of Tibonom’s gentle search for meaning.

In one strip titled “Clear Communication,” Tibonom writes a letter and then flies away in it over forest, mountains and the sea before being delivered to a friend in another city. In “Hummm… Let’s See?” he walks a long distance, enjoying himself so much that he passes a mysterious key, a bundle of money and other possibilities, only to realize what he’s done afterwards. In other instances, Tibonom faces the gruelling realities of daily life in the big city. In “The City,” he becomes freaked out when after staring at the tall buildings downtown they come to be reconfigured in his mind as the snarling face of an aggressive beast. Elsewhere he simply eats pizza at home, plays video games or tries to get his cat to do tricks.

When asked how readers might best approach his work Mavreas paused for a moment and then said, “Read silent comics very slowly.” It’s good advice. Doing so reveals Tibonom’s sometimes subtle movements and gestures, allowing the eye to take in the rich detail of every illustrated panel. ■