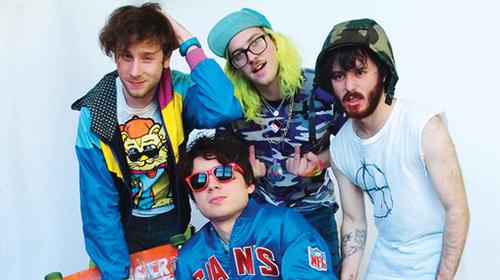 When New York chiptune rockers Anamanaguchi were tasked with providing the soundtrack to Ubisoft Montreal’s Scott Pilgrim vs. the World: The Game, their Montreal bosses presented them with “a fat binder,” containing level descriptions, concept art and other reference materials to work with.

For Endless Fantasy, the quartet’s new album that drummer Luke Silas calls their “first cohesive collection of material,” the group didn’t have a literal binder at their sides, but rather the ones that had been floating in their craniums for years.

“It’s like a binder we had compiled ourselves, one that we were much more in tune with,” Silas says. While they remain a chiptune band — the songs are composed on NES- and Commodore 64-emulating programs — they also use guitar, bass and drums, and therefore are capable of far more than just recreating your favourite Mega Man tune. Silas and guitarist Ary Warnaar were in New York when I caught up with them by phone.

Erik Leijon: Can you explain what Endless Fantasy means?

Luke Silas: I’ll give it a shot: We’ve heard from a lot of people that our music “makes me feel like a kid again, playing video games, making it to the final boss,” and that’s cool we’re instilling that kind of emotion, but it’s regressive. We want that feeling to permeate into more than that one memory, and it has all the potential in the world to do that. It’s future-nostalgia — it’s taking that hope and overwhelming enthusiasm and putting it into a new context.

EL: Do you still consider yourselves chiptune artists?

LS: It’s never going to be our intention to abandon this aesthetic or sound we love so much.

AW: We still use predominantly the same hardware and software we’ve been using to make our music the last few years, so in that sense we still are, but we also don’t feel the need at this point to constrain ourselves to the limitations of strictly hardware.

EL: Do you ever consider Endless Fantasy to be like the soundtrack to a video game that doesn’t exist?

LS: I think inherently there’s going to be some audiovisual connection to be made, just because that’s the language of these sounds, but we really are more of a band than video game-anything at this point. There are worlds we’re trying to portray with some of the songs, but there’s nothing like a loose game plot or competitive angle to it — it’s more writing things we think are pretty.

AW: It’s a collection of worlds, emotions and atmospheres similar to how someone would imagine a game, like being on a water level or snowboard level, but it’s still removed and separate.

AW: When we’re talking about the chiptune sound, we’re talking about this very simple, synthesized sound, the raw square waves, triangle waves and just the style of writing with them. But when people hear fast, arpeggiating square waves, they think video games, but it’s not because it was an aesthetic choice on the part of the people programming these games — that’s just really all they could do with what they were given. It’ll be hard for people to dissociate it and not think of Mario, but the style is popular, and people make a strong association with it. It’s also all over the radio and producers use it, but it hasn’t necessarily beaten that connection.

EL: You guys recently ran a very successful Kickstarter campaign, and one of your goals is new lighting for the live show. (Note: bassist James DeVito has done lighting set-ups for !!! and Ra Ra Riot). Will it be ready for Montreal?

LS: James is building all of it as we speak. It should be all good to go for this tour. ■