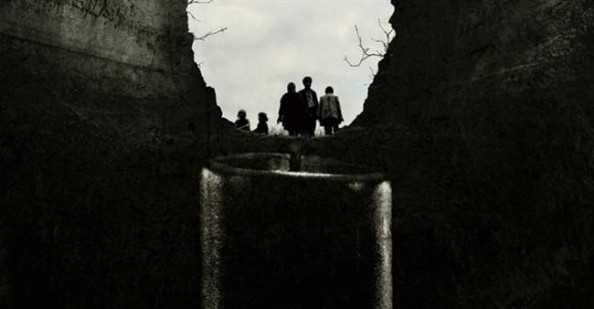 Entering a cave in No Place on Earth

There are so many films that cover the horrific tragedies that occurred throughout World War II. There are stories of bravery and protection, of kindness and betrayal — rarely involving happy endings. We are privileged in Montreal to be home to the Stermer family, who have one of the most incredible survival stories from the War. Janet Tobias’s documentary No Place on Earth allows it to be told for the first time.

Survival is the key word here, as the film suggest that a very small percentage of the Ukrainian Jewish population survived the War. The Stermers’ narrative allows you to hear about their experience first hand, without risk of falsehoods caused by the unknown. They also demonstrate how much strength and will was necessary to make it to the end, to survive.

While investigating large caves in the Ukraine in the 1990s, Chris Nicola, a cave enthusiast from New York City, discovered some strange artifacts: a lady’s shoe, buttons, a comb and other items. This led him to believe local rumours that a few families had survived WWII by hiding inside caves. This also began his search to find these survivors and to discover their stories.

Built upon interviews with the former cave inhabitants and Nicola, as well as reenactments, No Place on Earth reveals how 38 Ukrainian Jews survived the War by living in caves for 18 months — which according to the film, is the longest recorded sustained underground survival.

Tobias’s work is moving, including many stories of loss and grief, but it’s also interesting, as you learn how the Stermers came to live underground. I am always impressed by what people are capable of when they have no other choice — when they can only act quickly to ensure safety for themselves and others. The Stermers explain what it was like to exist over a year in complete darkness, how it felt to fear the light, in their backwards world where dark things brought comfort.

One of the most poignant moments in No Place on Earth is when the survivors return with their grandchildren to the Ukraine, to the caves that offered them protection. When they arrive inside one of them, a survivor asks for the lights to be turned out and in a moment which would make most of us nervous or frightened, he explains that he still feels protection in the dark.

Tobias expertly handles the telling of the Stermers’ story, capturing moving and difficult portions on film allowing the viewer to truly understand the ingenuity and endurance that were necessary to survive in the caves. The Stermer family themselves are engaging storytellers whose experiences as young children and luckily fantastic memories, allow for this tale to be told. No Place on Earth although handling dark material, emphasizes the survival and explains how it was accomplished, marking it as a unique look at a familiar War.■

No Place on Earth opens Friday May 31 at Cinéma du Parc (3575 Parc), screenings on Saturday June 1 will include the attendance of director Janet Tobias. On Sunday June 2, screenings at 3:15 p.m. and 7:30 p.m. will include Tobias as well as the Stermer family.