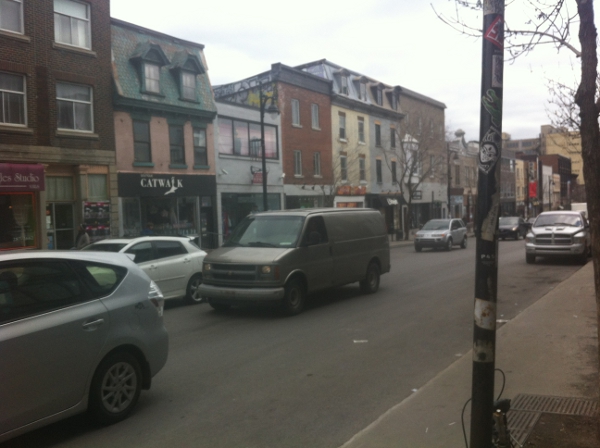 There are few greater, simpler pleasures in this town than walking along the Main on a crisp spring afternoon. But given how dire things are looking for Montreal’s multicultural microcosm, I’m not looking forward to doing it this year with my usual enthusiasm.

For years, pedestrians had to deal with all the interminable construction, and while many of us courageously traversed those rickety planks masquerading as sidewalks, the street never really recovered from those trying times.

Businesses have been shuttering left and right (I weep for BBQ Rocky’s — where I’ll get smokes and watch soaps now I don’t know), so in an effort to make the abyss more enticing to prospective entrepreneurs, the St-Laurent Merchants’ Association is spending $30,000 to dress up the growing number of empty storefronts.

Of course, it’s akin to trying to stop the bleeding from a gunshot wound with a few dabs of a wet nap, or more specifically it’s a modern take on Potemkin Village. The obvious, sad truth is that, given how gradual the Main’s depreciation has been, it’s going to take more than a few fancy snapshots to revitalize the area.

It’s not a bad idea, per se, because mushy newspapers certainly don’t make for good window shopping, but saving the Main will require progressive thinking. There are plenty of cooler streets around town these days, and history isn’t much of a selling point, even when it’s engraved on ergonomically unfavourable benches. Some streets just never get their groove back: St-Laurent merchants need only look to their cross-street brother Prince Arthur if they want a harrowing look into their future.

There’s a municipal election coming up later this year, so perhaps it’s high time that the supposedly “clean” party —  the one that rules over the Plateau with a sanctimonious wag and aspires to expand their empire — prove they’re  good at something besides pointing out how bloated and corrupt their political rivals are.

And if they don’t have any solutions, either, maybe they can just hike parking rates by another buck or two. That’ll help. ■