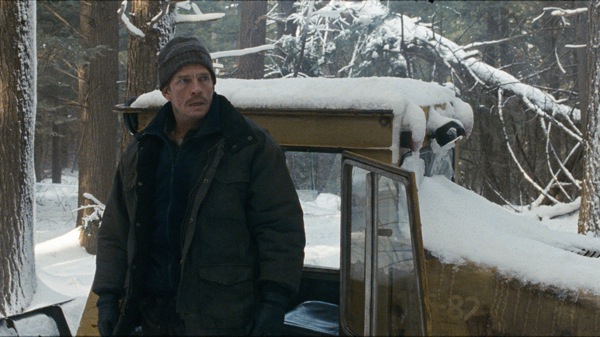 Anguish and nature were the two common themes in the four Québécois projects presented at the Tribeca International Film Festival this year.

The best new narrative director award at the festival went to Emanuel Hoss-Desmarais for his feature debut Whitewash.This black comedy exploring Canadian winter and Anglophone-Francophone tensions begins with a man run over by a snowplow. Moviegoers will only find out whether it was an accident or murder in the end, after piecing together non-sequential flashbacks that tell the backstory of Paul (Marc Labrèche), the victim, and Bruce (Thomas Haden Church), the perpetrator. Bruce, in an attempt to cover up his crime and deal with his guilt, flees into the woods, where cold and snow get him deeper into trouble. As jumps between past and present multiply, Bruce’s actions become less and less logical, until finally our sense of reality disappears entirely.

Inclement weather is another main character in the film, and an effective one — even though creators had to add fake snow during filming and digital effects in post-production to counteract a mild winter. During a Q&A session at Tribeca, Hoss-Desmarais related that he and co-writer Marc Tulin first got an idea for the film from the Quebecois’ obsession with winter, snow and snowplows. The writers watched classic westerns to inspire their man versus wilderness tale, but their hero confronts decidedly modern conundrums.

UP ALL NIGHT
The theme of anguish continues in A Journal of Insomnia, an online project featured as an installation in the Storyscapes transmedia exhibit at Tribeca. The project was funded by NFB Interactive and created by Montreal-based Guillaume Braun, Bruno Choinière and Philippe Lambert, of design studio Akufen as well as Thibaut Duverneix, co-founder of creative studio Departement.

According to the site, over 30 percent of residents in developed nations suffer from insomnia. The creators have been collecting insomniacs’ interpretations of their affliction from around the world since fall 2012. To get the full experience of the site, visitors have to make an appointment, perhaps to make sure users contribute in the middle of the night when they are properly frustrated with lack of sleep. They encounter an introductory sequence, accompanied by a ticking sound of a mechanical clock, and then can answer, in video, audio, writing, or drawing, a series of questions, such as “What is insomnia?” or “What is your relationship with your alarm clock?” The installation version of the site at Tribeca allowed visitors to answer in writing or drawing. Contributions included sardonic humor, fascinating surrealist drawings and cries for help.

Finally, two short films, Parallel North and Ina Litovski, explore nature and anguish, respectively. Parallel North, also presented at Festival du Nouveau Cinema this year, played as part of experimental program “Let There Be Light: The Cycle of Life.” Video artist Félix Dufour-Laperrière offers, in black-and-white, a vertiginous ride through a Canadian boreal forest inspired by Guy Debord’s phrase “the true is a moment of the false.” Ina Litovski, by Anaïs Barbeau-Lavalette and André Turpin, is a drama about a Russian-Jewish immigrant mother and daugther in a small Quebec town, screened as part of “Skin Deep,” a group of narrative shorts exploring anxieties about the body and identity.

Both films are arresting to the eye — André Turpin, incidentally, won awards as the director of photography for Denis Villeneuve’s Incendies — and their short form allows for laconic clarity missing from most full-length films at Tribeca, including Whitewashed. Interactive and short audiovisual forms are becoming more important at film festivals; this year, Tribeca also included a competition for six-second videos made with the Vine iOS app. It’s nice to see SODEC (which co-hosted the shorts along with Whitewashed) and the NFB supporting the short and interactive forms along with more traditional film formats. Especially if the messages these films convey are cold, angst-ridden, bizarre, and sardonic. ■