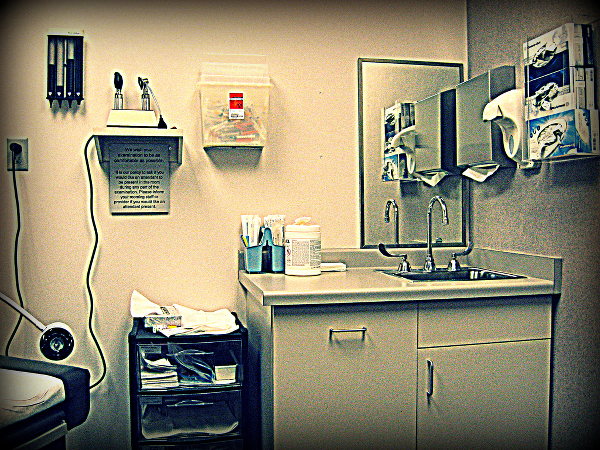 A family doctor’s office — not the easiest place to find oneself in Quebec. Photo via Flickr

I have a family doctor.

I haven’t been able to say that for 20 years, and the fact that I can makes me something of a rarity in Quebec. Finding one was no small feat.

The province is short at least 1,000 family doctors. There are, of course,  a number of reasons for this shortage, including that doctors here earn less than they do in the rest of Canada (Quebec doctors are the third-lowest-paid in the country, with salaries 25–45 per cent lower than Ontario), language requirements (fewer out-of-town doctors are choosing to settle here) and Quebec’s PREM system, which adds to the mix a dollop of la Belle Province’s specialty: unneeded bureaucracy.

Taken together, it makes finding a GP very difficult — like spotting a section of the Ville Marie that does not resemble post-war Afghanistan. It’s so difficult, in fact, that I only heard about my doctor from friends in the hospital system.

“He came from Cleve-land,” they said, pronouncing the name of the Ohioan city like they were Dothraki from Game of Thrones.

“He’s taking on patients. You have to act fast,” they said, giving me his age, ethnic background, likes and dislikes. My wife and I took this to mean that gifts (bribes) were encouraged, so we sent him a bottle of wine from his ancestral town in Croatia. We had appointments a week later. What to do with those appointments, though, was another matter.

The last time I saw a family doctor, I was 13. I had a dull pain on my right side, and my parents took me to see a neighbourhood GP who worked out of his home. The doctor was in his 70s. He had thick eyeglasses and the air of someone who knew their life had peaked in the 1960s.

“Well, it’s either appendicitis or a bad case of gas,” he said. “Try to fart. If nothing happens, go to the hospital.” I farted. Then my parents took me to the hospital, and the doctor retired shortly thereafter. I have been without a doctor since then, a fact that is only noteworthy for one reason: I’m an unhealthy motherfucker.

At 15, I was diagnosed with Crohn’s disease, which means I’ve spent most of my life afraid of things like iceberg lettuce, popcorn and peanuts. Chronic illnesses like this have a way of making you feel temporarily immune to matters of general health. You stop giving a shit about things like the common cold. You don’t care about high blood pressure or cholesterol. You assume that you’ve already paid your dues  and that you will get a pass on the latest seasonal flu or “gastro.”

Once I learned to live with my disease, though, I had time to think. I had time to wonder what other genetic booby traps my family had set.

“It should have been illegal for you two to mate,” I told my parents, scouring medical dictionaries and WebMD for degenerative diseases and flesh-eating disorders.

How long had I felt that pain in my knee? What does it mean when you’re light-headed in the morning? What are the warning signs of leprosy? My gastroenterologist bore the brunt of this hypochondriasis, fielding questions that had only a passing relevance to my disease.

“Where did you read that?”

“I think it was the Journal…”

“Yeah, the Journal of Crohn’s. It’s new. Anyway, I have this ache in my ear…”

“There is no connection between an earache and Crohn’s disease,” he would say, checking my ear all the same.

I used this tactic so often that he eventually made an important secondary diagnosis: I was full of shit.

“Get yourself a family doctor,” he would say.

“Of course, but let’s just say you were a family doctor, what would you prescribe for this?” I’d ask, pointing to a rash.

“I’d prescribe getting a family doctor.”

This, of course, is easier said than done, and even after I had an appointment with our new American doctor, I wasn’t taking anything for granted. I was actually worried about scaring him off, and I ended up trying to downplay two decades of medical madness.

“It says here in your chart that you had a kidney stone attack in December,” he said.

“And this MRI shows that you have a herniated disk.”

“You were hospitalized in June?”

“Wait, you have Crohn’s disease?” he asked finally.

The panic in his voice terrified me, and I started singing like a contractor at the Charbonneau Commission. I told him everything. I told him about every single cough, headache and sign of early-onset dementia. I described aches, bruises and growths that I was positive were rare and cancerous.

By the time I finished, I was exhausted and depressed. Everything had been documented, and I was sure I would never see this man again.

Instead of running in fear, though, he seemed emboldened and energized by everything he’d written down. He seemed happy to hear it.

“I have just one question,” he said, putting down his pen and adjusting his glasses. “Why did you send me a bottle of wine?” ■