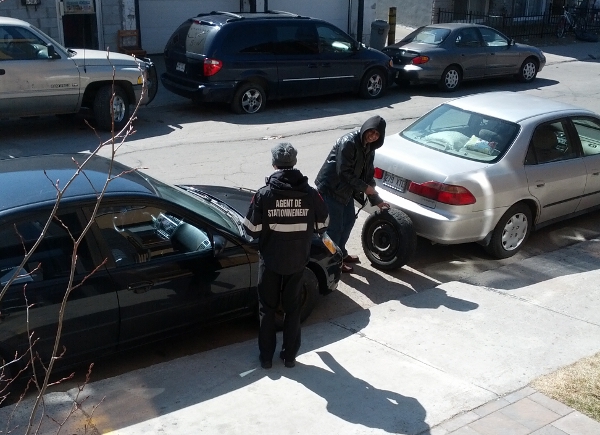 The long arm of the parking law at work

So, per the picture above, the city’s parking patrol has been on the move, ticketing everyone in sight, including people delivering newspapers.

But no matter what they’re doing or who they’re harassing, don’t bad-mouth them on social media. Or at least don’t post threatening images of them, wheatpaste portraits included, on the #Insta. Especially if they happen to be of police spokesman Ian Lafrenière, as Jennifer Pawluck, a 20-year-old student movement supporter, found out the hard way. The art Pawluck posted depicted Lafrenière with a bullet through his forehead, which was enough to scare the police officer and compel the cops to her door, where they arrested her. Now Lafrenière will have to prove his fear was the real deal in court, while Pawluck — who says she doesn’t know who Lafrenière is and that many of her friends (surprise!) don’t like cops — can’t go within a kilometre of police headquarters, a fact she is surely lamenting. Per another police spokesperson, the photo wasn’t the only factor in the arrest.

The Magnotta drama continues: Will a 2007 interview, with the guy then known by the far less dashing name of Eric Newman, for a study on sex workers be deemed admissible in court? The study’s authors contend that if the court hears how Magnotta attracted clients, protected himself on the job and so on, others will be reluctant to participate in research like theirs. But Justice Sophie Bourque, startlingly enough, sees things otherwise: that this information, which we admit we are sort of desperate to hear, is more valuable to the public, which needs to be shielded from Magnotta, than it is to the Ivory Tower folk. The preliminary hearing resumes next week.

Did you lose your job last month? Something like 54,500 positions (okay, so that’s pretty specific) were lost, so you might have. If so, welcome to funemployment, dudes. “I dress for the job I want: none.” You tell ’em, ItsTheReal.

Speaking of the exciting world of work, this time in Quebec, guerrilla tactics are scary as shit. We’re left to wonder whether a journalism union could ever wield such power.

Finally, Côte-St-Luc is taking the proverbial bull by the horns and battling Bill 14, perceived to be the ultimate anti-anglo act, by way of a YouTube video. The goal, apparently, is to get people people to get on their MNAs about keeping shit the way it is. Good on you, Côte-St-Luc brass — but unless you can now contact an MNA via the trusty Like button, good luck getting people to do anything online. ■