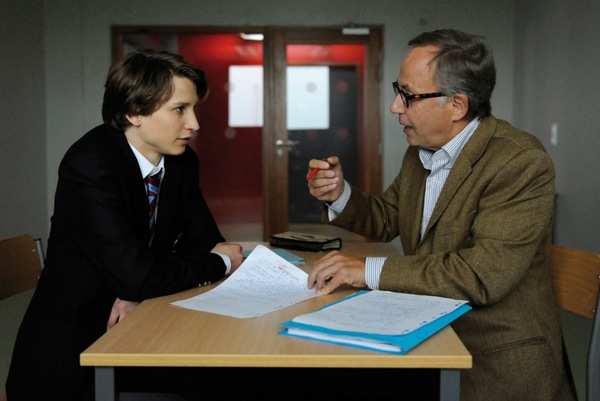 The latest from French writer/director François Ozon (Swimming Pool, 8 Women) takes place at a school in a small city. Tireless French character actor Fabrice Luchini plays Germain, a high-school literature teacher who, like many in his field, despairs over the poor literacy of his students. His wife Jeanne (Kristin Scott Thomas) is occupied with her own problems, running an art gallery whose owners are suddenly sniffing around for more return on their investment.

One day while marking papers, Germain is transfixed when an essay (on the banal topic of “what I did this weekend”) turns out to be not only well-written, but intriguing. His student Claude (Ernst Umhauer) has offered to help classmate Rapha (Bastien Ughetto) with his math homework. But the help is just a pretext for Claude to get into Rapha’s large house and insinuate himself into the family. With his own family background a difficult one, Claude has a not quite healthy obsession with how a “normal middle-class family” lives.

Transfixed by the voice in the essay, Germain takes Claude under his wing, ostensibly to help improve his writing but clearly also out of a strange fascination with the boy and his story, encouraging and enabling him to push his writing (and his real-life actions) into more and more risky territory. The plot, loosely adapted by Ozon from a play by Spanish playwright Juan Mayorga, unfolds into an increasingly complicated situation that’s in equal parts touching, disturbing and absurd.

The theme, which Ozon occasionally lays on a little thick, is about the human need for stories, as well as the way we embellish our own narratives, justify our unethical actions and mythologize other people’s lives. There’s also a compelling sub-theme about a young person’s need for teachers and mentors, and the equally strong need to eventually break free of their grip.

It’s not a perfect film; Ozon almost loses the thread a couple of times in the last half-hour, and Scott Thomas’s character is interesting but a bit underdeveloped, played mostly for cheap laughs at the expense of conceptual art. But with a solid cast, a tone that keeps you on your toes and a story that stays intriguing throughout, it’s a total pleasure to watch. ■