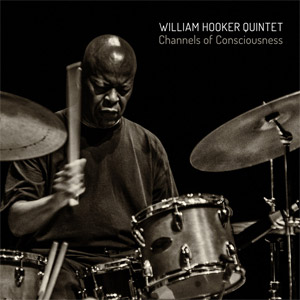 This 2010 set was captured at New York City’s Roulette. Prior to its November 2011 move into a larger 400-seat theatre in Brooklyn, Roulette was a tiny loft space in lower Manhattan, seating under 100 new-music aficionados. The evening must have been an overwhelming experience for the fortunate few who witnessed it live.

While the concert is structured into two parts separated by an interlude, the music flows continually. Each section has a distinct mood, the first three tracks exploding with frenzied free-jazz force. Drummer William Hooker is built for power, and with over 30 years experience in the experimental music underground, deftly plays around the beat, erecting pulsating walls of  pounding sound. Somehow finding the few holes within that barrage, percussionist Sanga rockets the beats per second and cross rhythm meter to uncountable dimensions.

If those waves were not crushing enough, guitarist Dave Ross does his best to conjure the spirits of the late Sonny Sharrock. Ross matches the percussive onslaught with slash and burn left-hand slides and trilling right-hand picking, continuously hitting and retreating from volcanic peaks. Bassist Adam Lane alternates arco drones with fast and free pizzicato, while trumpeter Chris DiMeglio adds further flourishes to the fire.

It’s tempting to describe the obliterating propulsion of the first 30 minutes by evoking Sharrock’s Last Exit, which was driven by the equally relentless drum and bass duo of Ronald Shannon Jackson and Bill Laswell. Yet the second half of the concert proves that Hooker is capable of more than just primo energy blasts.

“Lower Interlude” is a three-minute drum and percussion duet, a whirling mix of souped-up African and Cuban polyrhythms that maintains the momentum of the first set. Following that, however, “Character” gradually cools things down, leading to Hooker’s recitation of a poem about family interrelations, the theme continued on the closing “Mother’s History (untold).” In between are two churning instrumentals, featuring slow trumpet lines and simmering slide guitar runs, backed by quiet rolling toms punctuated with hand percussion. The heat is thus maintained in a manner different from the pre-interlude barn-burning.

Chances are you were not at the Roulette that evening, but that doesn’t matter. Close your eyes and immerse yourself in the next best thing.

Remember Blur’s “Girls and Boys,” their dancey tune about holiday hook-ups on foreign shores? Well, here, locals le Couleur relay the same important message in fewer, bilingual words (“‘Do you like Hall and Oates?’ was the first thing she said to me” is the awesome anglo refrain).

Thanks to freshly minted local label Lisbon Lux for this Beat Market remix — the label is launching itself (and a video for this song) tonight at Royal Phoenix, with a party feat. a sweet line-up of DJs. Details here.

Phosphorescent is Southern U.S. singer-songwriter Matthew Houck & cie., now based in Brooklyn. In depicting this song from his new, sixth LP, Muchacho, Houck and co-director Djuna Wahlrab juxtapose heartbreak and longing with magic realism in this strange video, full of grace.

The band plays Petit Campus with Strand of Oaks on April 16.