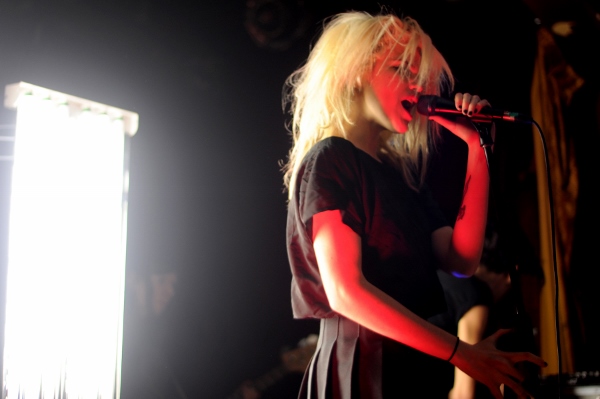 The crowd was pretty young, pretty gay, a little medicated, drunk and bitchy. The guy who yelled, “Shut up, bitch!” during How to Dress Well’s mic-less a cappella finale — well, that was kind of funny, actually. Singer Tom Krell at least achieved what may have been his goal in capping a set that saw half the audience chatting: getting the other half to shush them. Regardless of the extraneous noise, his set was a good one, especially when his electro-R&B balladry got louder and more danceable. The beats and ambient backdrop weren’t live, but he was accompanied by a violinist throughout, and that lent poignance to his tunes, many of which deal with some pretty heavy shit, by the way (the Joy Division-esque album-cover and t-shirt art are a tip-off if you can’t make out the words).

Then came Sky Ferreira, the little lady that the crowd came out for. Clad in black and backlit by small stacks of bright light to really play up that platinum blonde hair, she sang her collection of pop tunes from last year’s EP and her highly anticipated debut LP, supposedly out sometime this spring. So she doesn’t write them all herself — her team of collaborators includes Swedish outfit Bloodshy & Avant and that tiresome old hag Linda Perry (responsible for some of the worst writing and ghostwriting in contemporary pop), but whatever, there’s some pretty great shit in the mix there. “Everything Is Embarrassing” is a classic: it’s understated but catchy, and has that essential tinge of melancholy that makes pop music pointed and jabs at your heart, just a little.

She wasn’t incredibly animated on stage, but that could’ve been because she was getting over an illness that had wrecked her voice. She sounded great as she gripped the mic, though, and had strong support from a trio on guitar, bass and keys (no drum kit). The guitarist (Myles Matheny) is also a member of the Drums, one of my favourite bands at the moment, so that was a bonus for me. The crowd loved every sound and every move Ferreira made, though they were still kinda chatty and the room appeared to be half empty by the time the show was done. But at least no one told the headlining bitch to shut up. ■