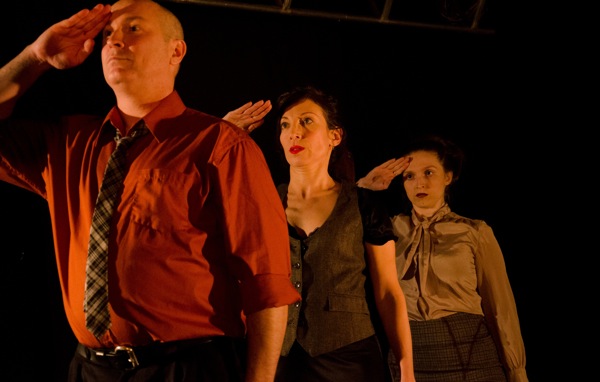 Jacques Brel is Alive and Well and Living in Paris. Photo by Marie Eve Kingsley.

Belgian chansonnier Jacques Brel suffered from the usual host of problems plaguing the Silent Generation: fatalism, shifting social values and questions of identity. His songs about women, seeking fulfillment and the foibles of humanity still find a dedicated following and have been covered in English by artists as diverse as Nirvana, Tom Jones, Cyndi Lauper and Leonard Cohen, to name a few. Nadia Verrucci, director of the In Your Face Entertainment theatre company, revives the 1968 Off-Broadway production featuring 24 of Brel’s songs. But, true to Montreal’s multilingual heritage, she has returned a number of songs to their original French.

“The original Off-Broadway production is all in English,” she explains. “As Americans, the producers couldn’t stage an all-French show. They had to make it accessible and translated 24 songs. Some are literal translations, and some just capture the spirit of the original.”

“There have been many revivals of the show,” Verrucci says, “but they’re almost always in English.” Verrucci decided that for the Montreal production, she would take about half the songs and return them to the original French.

“Just mention Brel to francophones and they start drooling. They’re so in love with him,” she says. “Anglophones don’t know him so well. It’s time for Anglophones to discover his music. The music is incredible.”

Brel’s lyrics are especially pertinent to a place like Montreal, where identity is personal and political. His struggles with clashing cultures sound familiar. Verrucci explains, “A lot of his songs are about his own identity and being from Brussels. Belgium is a lot like Quebec with two distinct cultures — the French and Flemish speaking portions. There’s a lot of political tension. The Flemish want to separate. Brel loved being and hated being from Brussels at the same time.”

Of course, Brel’s work covers a range of topics. “He makes fun of the bourgeoisie. A lot of his songs are question religion and death. Living through World War II, his songs are also about the hypocrisy and impact of war,” Verrucci says. “But there are many about love and relationships, too. Women confused him. A lot of the songs poke fun at the desire for women in an almost pathetic way.”

In Your Face Entertainment’s production is more an homage to the artist than a play or a concert. “There are four people on stage, one set, few props, and few costumes,” Verrucci says. “It’s all about the music, but don’t expect a concert. We are staging and acting out the songs. Some are just meant to be sung by a soloist. Some are fleshed out as little stories. We choreograph them.”

Shows like Jacques Brel is Alive and Well and Living in Paris are also part of a trend to have more musical theatre in Montreal.

“And of course,” she says. “Come see the show. I promise you will leave loving Jacques Brel.” ■

Jacques Brel is Alive and Well and Living in Paris is playing at the Mainline Theatre March 14–24. Tickets are $25, $20 for students.