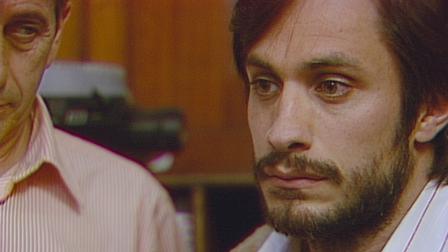 Gael García Bernal in No.

One of the Oscar nominees for best foreign language film this year, Chilean drama No tells the factually inspired story of an advertising exec (Gael García Bernal) hired in 1988 by the leftist opposition to run election ads against the authoritarian government of General Pinochet. Facing opposition from his right-wing agency boss (Alfredo Castro) on one hand, and the stuffy, old-fashioned lefties he works with on the other, he has to come up with a winning campaign for an election that many of his compatriots figure is rigged to begin with.

Director Pablo Larraín shot the whole thing on the old-school format of 3/4-inch video, a smart decision that gives the film an authentic period look (and allows him to smoothly incorporate news footage from the era). Every once in a while this mix becomes a little problematic (are we looking at real footage or recreations?), but it’s generally very effective and engaging.

Some folks on the left have criticized the film for suggesting that the election ads, rather than the longstanding opposition movement (whose members often risked, and in some cases sacrificed, their lives), were responsible for turfing Pinochet. Ah, lefties: we can always be counted on for nit-picking and infighting. At any rate, the film never suggests that the ads single-handedly won the election; it’s just the story that Larraín (whose parents were both politicians) chose to tell.

Bernal, looking handsome and brooding as ever, is strong as the lead character, who has to come up with inspiring images and slogans even as he struggles with his own adman’s cynicism and weariness with the political system. There’s also a melancholy subplot involving his ex-wife (Antonia Zegers) and their young son (Pascal Montero).

Understated and unpredictable at every turn, the film is a fascinating glimpse at one aspect of the end of a dictatorship, as well as a reflection on the power of messaging (Mitt Romney’s team could have used a screening of it last year) and a strong personal story in its own right. No is a film well worth checking out. ■