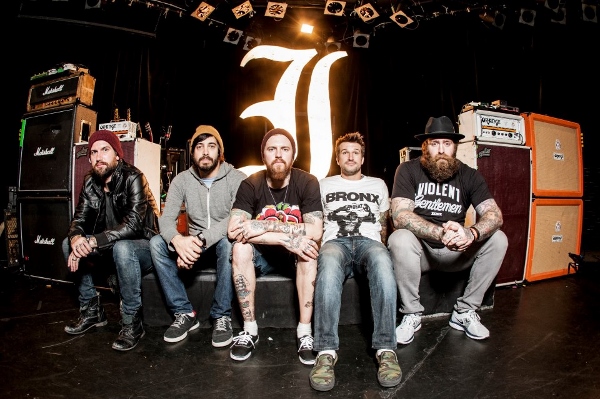 Every Time I Die. Photo by Josh Hulstein

The members of Buffalo, NY metalcore band Every Time I Die are men’s men — they’re notoriously good bowlers, are covered in tattoos and have luxurious beards.

The beards are one thing. Whether growing a beard is, as singer Keith Buckley says, a way of reclaiming one’s manhood and revolting against the hopelessly emasculated, or simply a consequence of long tours and poor hygiene, it’s an enigma most women don’t care to unwrap.

But the metalcore is another. Previously a relatively unknown crossbreed of metal and hardcore and an unpopular subgenre, now a reason 18-year-old boys in wife-beaters get neck tattoos, metalcore is both loathed and loved in the underground.

Every Time I Die, for their part, have been at it for 15 years — and metalcore’s rise in popularity is, if anything, maybe a pat on the back and a way to earn a decent living.

Their last album, 2012’s Ex Lives, was their highest-charting album to date, earning them the No. 20 spot on Billboard’s Top 200 when it was released last March.

“We’ve been going for 15 years,” says Buckley over the phone from Detroit. “It’s not like it’s about time, but we’ve worked hard. We work a lot harder than 95 per cent of the bands that exist today. And I think the hard work is finally paying off. It’s kind of an approving nod from the universe.”

Still, the recognition, as nice as it is to receive, isn’t the band’s end goal. And, as much as metalcore’s perceived to be an inferior subgenre by metal-loving Internet trolls, the band has every intention of sticking to it.

“We had no say in what became popular, and I don’t think we necessarily have a huge part in it. We’re only now doing our first real headlining tour,” Buckley says.

“Staying true [is] doing what you love despite the reaction of the public, be it good or bad. It would be disingenuous to change our style just to avoid onlookers.”

Instead, their reaction was more along the lines of, as he says, “We charted on Billboard. Huh. What’s next? Well, get in the van.”

DON’T FORGET YOUR ROOTS
Buckley started the band when he was 19 with his brother Jordan and guitarist Andy Williams (and two others who’ve since left), and it wasn’t long before they found themselves onstage at major European festivals.

Looking back on the early days, Buckley says he’s embarrassed.

“What business did a 19-year-old have standing on a stage in front of other people?” he says. “I did things that I can’t even fucking imagine doing now.”

“I’m talking about doing huge festivals when I was 19. Way too many people were watching us. I had no idea what I was doing,” he continues.

How they ended up in front of so many people is, as it usually is, a matter of who you know; Buckley acknowledges their early career as a band was built on being relatively decent human beings who happened to know a lot of people and promoters in positions to do them favours.

It was fortuitous then, but their success is deserved now. With six albums to their name, an exhaustive and perpetual tour schedule, as well as a successful sometimes-side project with Buckley and members of Anthrax and Fall Out Boy called the Damned Things, their work ethic is proof.

RECORDING EX LIVES
Ex Lives is a different breed of Every Time I Die record. With songs like “We’rewolf,” “Pornogratherapy” and “Who Invited the Russian Soldier?” gracing their earlier discography, the lyrical style usually employed by this hard-partying band is one laced with humour and sarcasm.

Yet the 2012 album is notably more somber. These aren’t the party anthems you’re looking for.

“That’s one of the reasons it’s called Ex Lives. I didn’t ever really want to be that way again,” he says.

Buckley wrote three or four of the songs appearing on the 2012 album while on tour with the Damned Things in Europe, and during a particularly tough period of his life.

To add to his stress, the album was recorded differently than previous efforts, partially owed to the fact that it was derived more organically — that is, not the exclusive product of a studio songwriting session. The band, filled out by bassist Stephen Micciche and drummer Ryan Leger, also recorded all in the same room for the first time, and Buckley’s songwriting was propelled by real-life happenings that came to a head on Ex Lives.

“It’s just a real gross bunch of music,” he says.

Though the album is lauded by critics for being more serious than the usual fare, Buckley has no intentions of returning to the same place for new material.

“I don’t like [the tone]. It’s weird. When I was writing it, I was in a terrible spot, mentally. Angry, super depressed, fucking miserable. So I don’t like it, and it’s not something I want to return to,” he says.

“I’m not like, ‘It’s record time. Let me go hurt somebody I love so I can have all this shit to write about.’”