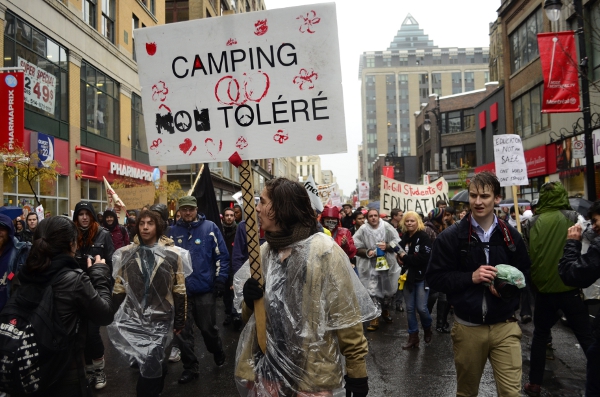 Montreal’s a protesting kind of town. We were taking to the streets for myriad causes long before last year’s manifs, and will do so long after the current bumper crop of strident undergrads have gone turncoat — so the little rabble-rouser in each of us was probably a little disappointed to hear of the paltry numbers that turned up at Palais des Congrès to rail against the Plan Nord this past Friday and Saturday.

According to the CBC’s head count, both rallies were more Hundred Man March than Maple Spring. Oh, sure, there were the requisite police clashes, and it concluded with a bus filled with three dozen arrested protesters, but in the court of public opinion, the orderly chaos that occurred was more ceremonial than incendiary. Maybe Plan Nord just isn’t as sexy an issue as tuitions or police brutality, and last year’s memorable Plan Nord-related protest had more to do with the guy giving the speech that day.

Last year’s manifs were, even for those detached from the activism game, invigorating, but at this point, most people are more content to appreciate the amazing photo galleries chronicling the red square movement rather than suit up for another round.

It would be foolish to think those attendance numbers won’t return to respectable levels once the PQ’s toothless education summit kicks off and it becomes evident Marois plans to surreptitiously sneak tuition hikes back on the table (by another name, like your soon-to -be favourite buzzword ”indexation”), but until the silent majority — and the odd protest adrenaline junkie — are given a fresh list of reasons to be mad, it would appear as though the red tide has rolled back to its usual fringe levels. ■