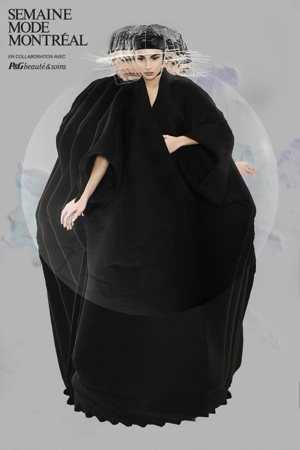 Montreal’s 24th Fashion Week has come and gone, leaving the usual trail of photos, blog entries, videos and general chatter behind it. With the exception of two avant-garde collections, Pedram Karimi’s debut designs and Matière Noire’s Amish-punk pieces, the general focus was clearly aimed at the youthful, urban, professional woman, with emphasis being placed on comfort and practicality.

The most popular comeback pieces were the tuxedo pant and jacket, shown alone or separately, but the style element that most designers incorporated into their lines was geometric colour blocking, occasionally seen as part of the iconic, A-line, mod-inspired dress of the early ’60s or of a ’70s, bordering-on-boho-chic version of the same piece. This was, however, closely followed by the peplum, the mock turtleneck and, yes, the actual turtleneck collar.

Seen less but making a bolder statement was the fringe, applied in non-traditional ways: Nadya Toto and Martin Lim each presented a piece covered in flat, inch-wide strips, and Martin Lim designed several items with a multitude of brightly-coloured, skinny fringes bursting out of them from various seams. Military-inspired designs and styling popped up from time to time, but it was Luko Marion who reined in this by sending each of his models down the runway wearing leather air force caps with birdcage veils and by adding a structured shoulder to his key pieces.

For the most part, silhouettes were natural, with collections featuring the circle skirt, the pencil skirt, the A-line dress and the tailored suit.

There was definite continuity, with regards to fabrics, this week. The fur, leather, sheer and lace that have been gracing magazine editorials and blogs for at least six months now were all present on the runway, with the latter three having been frequently used by almost every designer. While this might denote a certain lack of originality, everyone who is pleased with these fabric trends can clearly rest assured that they will all be around for at least another season. Here and there, a foreshadowing soupçon of metallic fabric gleamed among the monochrome and muted tones. but if you’re a fan of such textiles, you’ll have to wait for spring/summer 2014, which is when trend-predictors say they will be back in full force.

People who were expecting new and exciting fashions may be left feeling unsatisfied by SMM24, but, when it comes down to it, we need outfits we can wear to work, on a first date, to an art opening and to a multitude of other real-life events, and there were definitely enough well-made, appealing, practical and affordable pieces to choose from. As Montrealers, we are known for our ability to style just about any outfit into a banging one, so chin up. And, to our local designers, brava on all of your hard work and to making another successful Fashion Week in La Métropole possible! ■