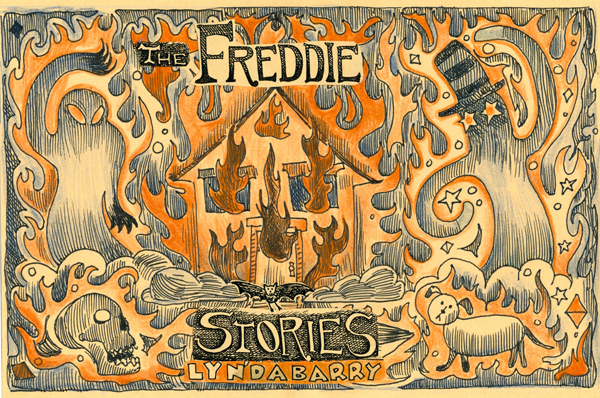 The Freddy Stories, by Lynda Barry

When Montreal press Drawn & Quarterly began publishing influential cartoonist Lynda Barry in 2008, they focused on her long career as an inspirational teacher of writing and drawing. Picture This and What it Is drew heavily from Barry’s popular “Writing the Impossible” workshops and public speaking engagements (like the epic talk that she gave at the Ukrainian Federation in 2011), where she explained some of the secrets behind her artistic process.

These beautiful oversized volumes, a mix of writing and illustration, introduced Barry to a new audience, one that might have been unfamiliar with her brilliant weekly comic strip Ernie Pook’s Comeek, which ended its run in 2008 after nearly three decades of being serialized in dozens of alternative newspapers. Those only familiar with Barry’s career as a creativity guru may be surprised by the darkness and depravity of the humour in her comic strip, which concentrates on a trio of adolescent siblings being raised by their mother. Thanks to Drawn & Quarterly’s efforts, this influential work by a seminal alternative cartoonist is back in print in redesigned editions, first last year’s Blabber Blabber Blabber, collecting the earliest strips, and now The Freddie Stories. 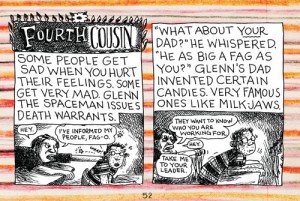 The Freddie Stories focuses on the youngest, and perhaps the most screwed up member of the family in Barry’s comic strip. As Freddie’s older sister Marlys explains, sometimes her younger brother’s life has been “seriously terrible;” in addition to this, she tells the reader, “he has certain mental disorders known as emotional problems and is often called a fag.” Freddie has fallen through the cracks and suffers because of his low position in the family hierarchy and inability to stand up for himself. In one strip he nearly dies of a high fever because his oldest sister Maybonne dropped acid instead of nursing him.

As the book opens, our hero has been sent to spend the summer with his beer-swilling aunt, and tags along after his cousin Arnold. Not long after, Arnold’s pyromaniac friend sets fire to a house, killing a woman inside and pinning the blame on Freddie. After he is proven innocent and released from lock-up, Freddie experiences the effects of this trauma by seeing the faces of those around him as burning skulls. 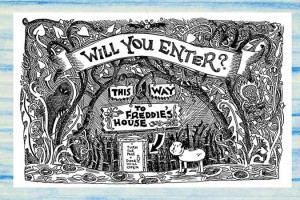 This episode sets the tone of Freddie’s experiences in the pages that follow. Like in Cruddy, Barry’s masterpiece novel, The Freddie Stories draws readers into the dark heart of troubling childhood experiences. Freddie struggles with being a loser, suffers abuse at the hands of his classmates and, like all children, chafes against his complete inability to control his life. While Freddie is majorly damaged, Barry’s sharp writing also manages to make his childhood experiences universal and compelling. For instance, Freddie is haunted by Buddy, a dark spectre with narrow eyes who steals children with a sack. Freddie tells the reader “maybe you have seen him in your bedroom. He is imagination, obviously,” and yet the anguish he causes Freddie is very real.

After all of his bad times Freddie is granted solace at the end of the book, when he narrowly avoids being sent back to his aunt’s house for the summer. Instead he stays home, sneaking out of the house to explore while his mother is at work. After all his troubles, seeing Freddie happily waving at a bird and telling it to “Be free!” is welcome relief. Freddie’s brief liberation, of course, ultimately falls under a dark cloud. When he finds a sickly stray dog behind a dumpster and brings it home his angry mother refuses to let him keep it. As the dog walks away it comes to symbolize all that Freddie has lost over the course of the book. He watches it walk off and mournfully calls “Free dog, if I was older. Free dog, if life was different. Free dog, this book is for you, free dog, wherever you are.” Despite the heavy themes and harsh challenges that Freddie faces, Barry’s comic strips are always accessible and crackle with the manic energy of childhood. ■

Jeff Miller is the author of the award-winning short story collection Ghost Pine: All Stories True. He lives and shovels snow in Little Italy.