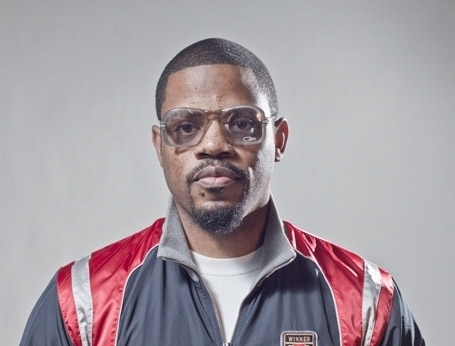 A multidisciplinary talent like Detroit’s Karriem Riggins can only stay behind the scenes for so long. An accomplished jazz drummer, session musician and producer, the Stones Throw label artist has worked with golden hip hop greats like Dilla, Badu, Common, the Roots and Kweli as well as household names like Diana Krall and, recently, an aging rocker they used to call “the cute one.”

In town Monday night with rising local star Kaytranada (whom, he says, unsolicited, he is really looking forward to hearing) and curator of cool Scott C, Riggins spoke to me by phone about being a dad, a drummer and a dedicated music dude.

Darcy MacDonald: I read that you really like kids and you have a son of your own. I have a daughter, too; her name is actually Melodie. Do you ever worry that when you’re so into music, and you try to introduce it to them, that that passion will be the thing that later turns them off?
Karriem Riggins: My thing was, I was never forced to do music, so I can relate to what you’re saying. I mean, living up to a name — names have so many meanings, you could define a name in so many different ways. I mean, forcing is never good — it’s way better for a child to express their own interest. It’s good to introduce things and try to keep feeding them that, if it makes sense.

DM: That said, is your son into it? Do you let him get up in your stuff?
KR:  Yeah, he loves music. He loves drums, rap, breakdancing and pop rockin’. He’s really showing an interest in breakdancing right now, so that’s something that we’re gonna start investing in, as far as taking some classes and him just learning about the culture.

DM: What are some of the pros and cons of raising a kid “hip hop”? What are the potential benefits, and do you worry about the potential pitfalls?
KR: Well, I worry about the negative aspect of it, of course, but I think introducing the positive aspects of the culture and the music says a lot. You’ll witness the growth and see how they can embrace it on a positive note.

It’s important that (the child) has a passion to do art. That goes far in life. It may mean something in a whole different context. They might go into business, and know how much work it takes to make a business succeed.

DM: What sort of rap music can you play for a six-year-old boy?
KR: Well, we don’t listen to the radio. He’s really into that old-school music. He loves Chubb Rock, De la Soul, Tribe, Common — you know, he loves his uncle, he calls him “Uncle Rash”! We’ll be in the car and he’ll go, “Play some beats, please!” So he loves that more than anything else.

He knows at the end of the day it’s all about me and him. We have a special relationship, man. I thank God for that. He’s a blessing. He’s my sunshine, and I love it. It’s a blessing.

DM: In terms of your musical evolution in Detroit, how would you say that plays into the musician and, by extension, the person you became?
KR: This is the heartbeat of my whole career. Just being able to witness all of the music that I’ve witnessed in this city, growing up and going to rehearsals with my dad [acclaimed jazz pianist Emmanuel Riggins] and Marcus Belgrave, being around them and a lotta these soulful, influential guys — legends — definitely molded me into the person I am now, and Detroit is very important to me because of that.

DM: Marcus Belgrave was an early teacher of yours. Please tell me a little about him.
KR: Yeah, definitely! He gave me my first trumpet and my first set of Gretch drums at a very young age, and he’s just always been supportive. He and my dad had a band together, and he’s just been around the scene forever. He played for a few years with Ray Charles, had his own label in the ’60s and ’70s. He’s been doin’ his thing for years! I’ve always stayed in touch with him, and in high school I would attend these workshops that he held every Sunday. That’s where I learned to read and interpret, to sight-read charts and figure out how to play them. It got me ready for New York. When I got to New York, I felt like I was ready to hit.

DM: I’ve had the privilege of being able to speak to a fair number of people close to J Dilla, including his brother and Ali Shaheed Muhammad, and the question I always ask to address Dilla’s legacy is: what do you feel you imparted to each other?
KR: I think musicality, overall. It’s all growth. We all as people grow together, and I think God gave us the chance to work together and I learned a lotta music from him. He gave me a lotta records, man, and I gave him a lot, too. That’s just what brothers do. Brothers and sisters share the knowledge. He was a music junkie and his ears were wide open to learn something new. And that’s the world I’m from, being a jazz musician and a musician in general. We’re always seeking to bring it to the next level and that’s what Dilla was on.

DM: I know you worked with Paul McCartney last year, and that you play with Diana Krall. These are people heads might not think hold a strong opinion on hip hop, but they are prolific music cats, so they must. When you work with artists from so far outside hip hop circles, do they ever surprise you with what they know?
KR: I think being around Paul McCartney, working with him the few times that I have, I was just trying to learn all I could. I didn’t really try to talk to him about hip hop. When we did talk, he’d tell us old stories about the Beatles and comin’ up in Liverpool. I learned a lot from him just as a person.

But Diana Krall is definitely up on hip hop! She digs hip hop and I love working with her because she’s just wide open about listening to music and digs different genres. She’s definitely open.

DM: How many other players do you have with you on this tour?
KR: Well, I have two players with me on this tour — record players! I’m on the ones and twos playin’ some of my favourite music, some of my remixes, beats, all kindsa stuff. Just comin’ to rock! ■