Education at any level in Quebec should be tuition-free. Here’s why:

An informed and educated population is critical to our development as a society. We need CEGEPs to produce our technical workers, from aerospace to zoology, and we need universities to provide the extra training we require of our engineers, doctors, social workers, entrepreneurs, etc. Additionally, we know that these things contribute to Quebec’s economic growth and well-being.

The only justifiable barriers to obtaining that education are academic qualifications. If we want the best and the brightest in our halls of higher learning, we need to level the playing field so that the educational aspirations of a kid from Pointe St-Charles are just as realistic as a those of a graduate from a Westmount private school.

To argue that the current system is accessible to all is like saying anyone can reach the top floor of Place Ville-Marie; in truth, access to wealth plays an inordinate role in that challenge. Many children of affluence need not concern themselves with the costs of tuition, housing, food or the demands of work — they can devote all their energies to their studies, riding the metaphorical express elevator to PVM’s 47th floor.

For other students, financial hurdles make the trip much harder. They go into debt to ride the elevator for a few floors, or struggle up 1,013 stairs as they balance work and studies, or sit frustrated on the street, knowing the climb is beyond their capacity.

Tuition-free university isn’t a radical idea. It was proposed in the Quiet Revolution educational reforms proposed by Quebec’s Parent Commission in 1963–64. The report proposed the creation of a tuition-free community college system we now call CEGEPs and that university fees be frozen in the short term, but eventually eliminated.

This week, even former PQ premier Jacques Parizeau described free education as a realistic option that merited discussion during the summit.

(Excuse me while I toss a few bones to numbers geeks, the rest of you can rejoin us after the next breaker.)

Tuition fees here for students from other countries and provinces have meanwhile risen at an even higher rate. International undergraduate students in Quebec universities now pay up to $16,259 a year, and students from the ROC pay $5,858.

As we head into the government-sponsored Sommet sur l’enseignement supérieur later this month — a forum for debate that arose from the massive student protests last year over the Liberals’ proposed tuition increase — university fees remains a central issue. Higher education minister Pierre Duchesne has put nearly $1 billion for universities on the table, and he’s added $700 million in icing, provided all parties can agree on how to spend it. Duchesne has called free education an ideal that must be weighed against the practicalities of Quebec’s finances, but his party and his premier have promised that all options are open for debate at the Feb. 25–26 summit.

And how much would free university cost? Well, estimates leaking out of the education ministry at a rate that would have sunk the Titanic in 10 seconds peg it at over $1 billion a year, though the figures provided by the government (PDF) show that it would be considerably lower. The billion-dollar boondoggle, no doubt intended to discourage supporters of free education, is the cost of the entire university system, not the added cost of eliminating tuition.

(Quebec also likes to pretend that 35 per cent of the tuition hike would “return to students” through financial aid. This ignores the fact that the tuition component of financial aid is a government loan guarantee, not a grant, so is worth pennies on the dollar to Quebec, but will cost students much more than the actual increase, just like any other loan.) 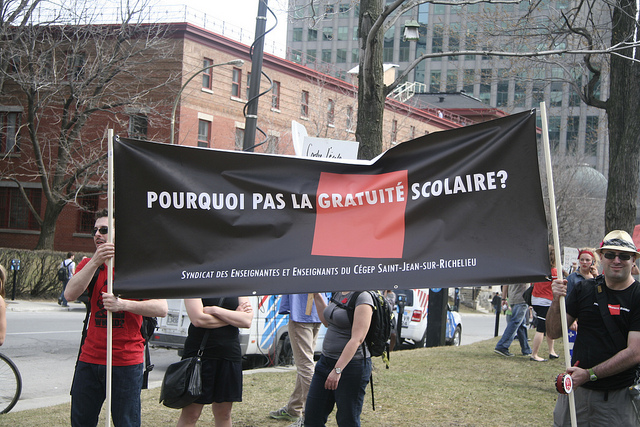 Free education is no more radical than free healthcare which, as we all know, isn’t free: it’s taxpayers who provide the funds to ensure that no one goes without medical treatment regardless of income. That, too, was a radical concept 50 years ago. Now it’s a point of pride for most Canadians.

But some still argue healthcare is a basic right, a fundamental necessity, while university education is both a luxury and of personal economic benefit to the graduates. After all, why should the state pay full freight for a doctor who’ll make $160,000 a year, a lawyer who’ll make $250,000, an engineer earning $90,000 (plus tips, wink, wink)? And what of the teacher making $32,000, the social worker earning $25,000, the artists lucky to make their rent?

The response to that question has for many years involved variations of the so-called income contingent repayment plan. The idea is that you can accommodate the poor who earn less money after graduation by letting them pay their university debt over a longer period. The fact that this merely increases the cost of the loan for low-income workers is considered, well, irrelevant.

Almost 30 years ago, I came up with a different plan. I thought it was genius at the time and only realized its basic flaw many years later. I called it the Post-Obligatory Education Tax.

(I tortured the language for a cute acronym, POET. I plead guilty. These days, I would have called the Tertiary Education Access Tax.)

The idea was simple. In exchange for a universal free tuition and an all-grant student aid program for those in need, all students would agree to pay a surtax on their incomes after graduation.

That way people who most benefited financially from their education would pay back a greater share regardless of their economic background. Rich and poor alike who became successful doctors, CEOs, engineers and financial analysts would express their thanks by paying higher taxes. People who became productive social workers, teachers and artists would only pay extra if they made more than a fixed income level. What an educational utopia! An egalitarian paradise where students’ financial contributions to their studies were not based on what their studies cost, but what they were worth.

Do you see the flaw? No, don’t fixate on students who leave the country or find other ways to cheat. It’s much simpler than that.

Please feel free to continue the conversation. I’ll be back next week to wrap it up. ■

Peter Wheeland is a Montreal journalist and stand-up comic. His sardonic observations about the city and province appear at least once a week in this space. Follow him on Twitter, or find out about his upcoming stand-up performances here.