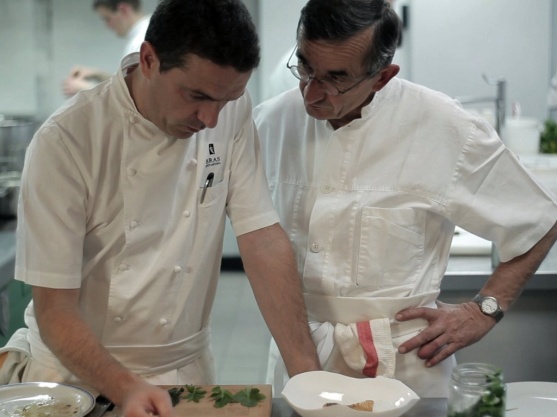 Step Up to the Plate (Entre les Bras)

Paul Lacoste’s documentary is a portrait of a family business. Famed chef Michel Bras (whose eponymous regional French restaurant has maintained the coveted three Michelin stars since 1999) is shown in the process of handing over the restaurant to his son, Sébastien. As the father struggles to let go and the son strives to make his own name, we get glimpses into their extended family, from a powerful matriarchal grandma who still pulls a lot of weight to Sébastien’s young son, who brings out mixed feelings in his parents as he already seems to be on the same path to fulfill the family destiny.

Although it’s far from reinventing the documentary wheel, with vérité footage woven together with talking-head interviews, the doc stands out a simple, minimal style, unhurried pace and plenty of quiet moments. The Pyrenees setting provides some quite beautiful scenery, as does a segment in which the Bras duo push their culinary horizons with a trip to Japan. Although the film is subtitled in English, the bilingually challenged are at a slight disadvantage as some of the translation is a little odd — but I confess that is a very nerdy nit-pick.

If you’re not the type of person who’s into food, this isn’t going to be the film that wins you over. Though the restaurant’s reputation is surely deserved, onscreen it looks like the kind of meal for which you’d pay a lot and still be left hungry, with small portions preciously arranged on the plate.

But food aside, the film’s dramatic core is really in the family dynamic, and Lacoste does a fine job of portraying its universal elements. Generally speaking, though, both the film and its subject are aimed strictly at more refined palates. 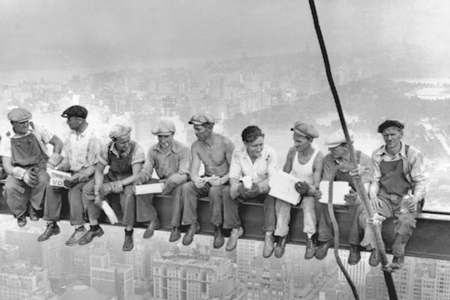 This Irish doc focuses on one of the most famous photographs of all time, a 1932 image depicting a group of construction workers eating lunch on a steel girder high above Manhattan. The workers’ identities have always been mysterious, but through diligent detective work, the filmmakers tentatively trace the roots of two of the men to a small Irish village —  a story that’s but one angle in a multifaceted take on the photo.

Surely everyone has had the experience, as a student, of having to come up with an essay when, to your horror, you realize there isn’t much to say on your topic. What do you do? There are only two options: hit the wall with the absolute maximum amount of research, however tangentially related, or fill up space with pontification, speculation and as much bullshit as you possibly can until you have enough words.

Without much source material to go on, the filmmakers of Men at Lunch employ both these approaches.  Every possible interpretation of the simple image is expounded on at length, every tenuous thread is explored all the way to its end. There’s some inherent drama in the photo to be sure, but this 70-minute film would have been a great half-hour. ■